Day 12 of the 12 days of photos features Alex and the results from a truly enjoyable creative shoot in the nature reserve that used to be a chalk pit for a cement works.

I first worked with Alex at the end of 2021, when he was the model selected by a client. We worked well together and when I needed a male model for a camera club portrait evening I booked him again, and the results from my handful of test shots were brilliant.

These two were taken with constant LED lights in an Ezybox medium octa softbox for the main light with a reflector under for fill, and an LED panel light behind on the left for a rim light. 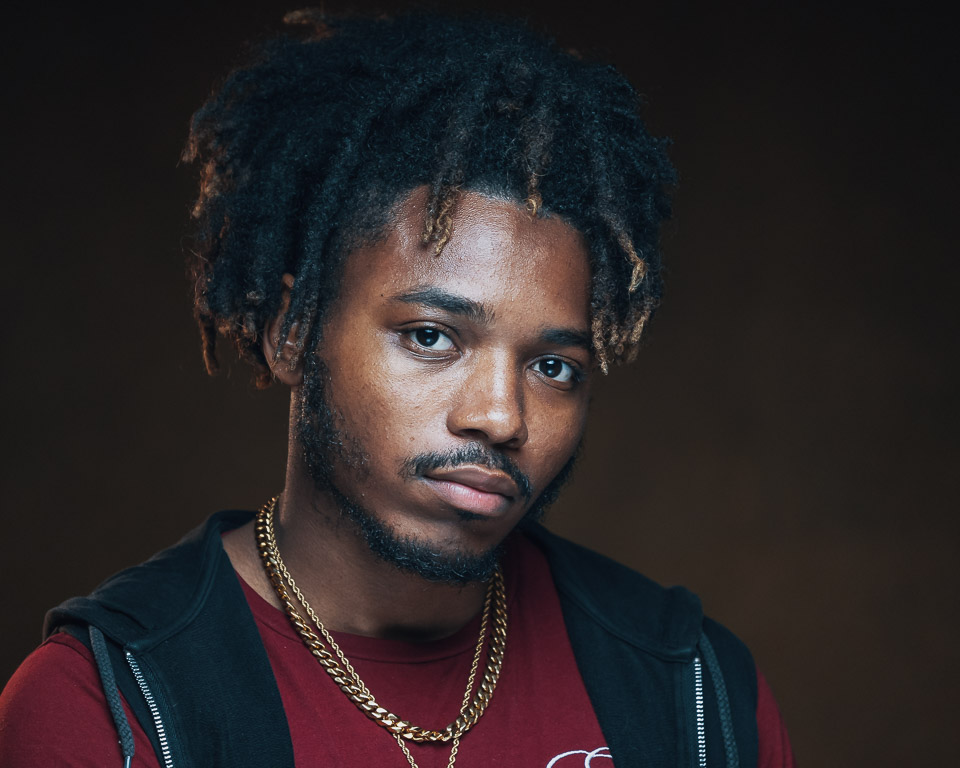 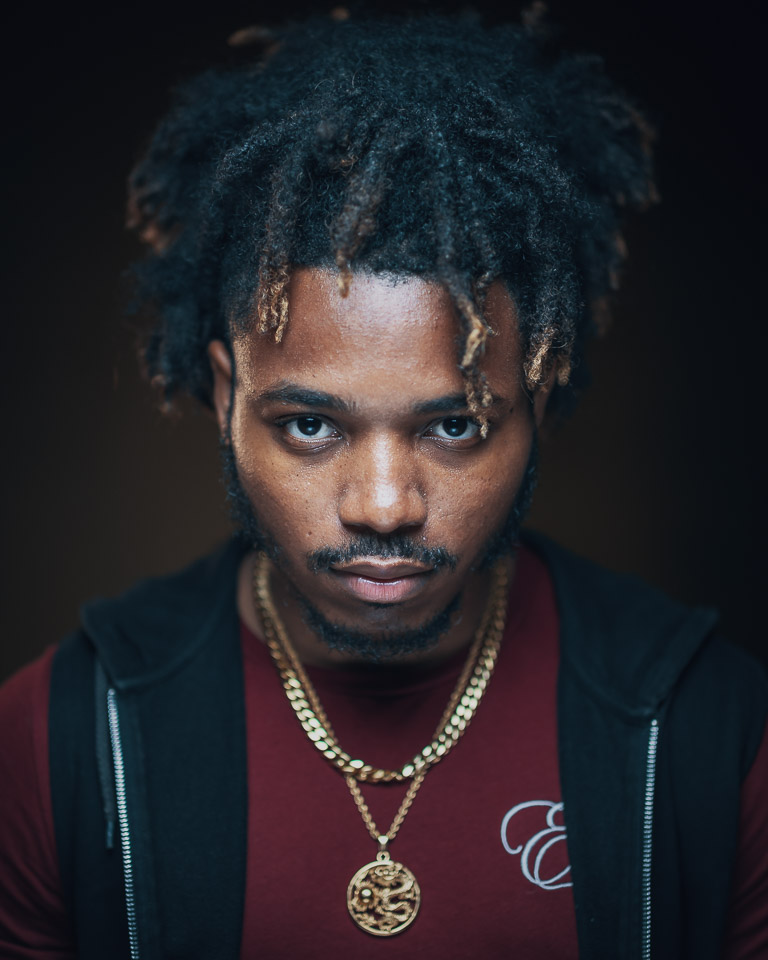 We both knew that another shoot should follow, and late in August 2022 we met up for the creative shoot that resulted in these pictures below.

The shoot moved across several different locations within a few minutes walk of each other. At each spot Alex pulled another outfit together to fit with the location. The result was a great variety images.

First up was to explore a small tunnel where the light was relatively dim for an August day time shoot. EOS R6 works wonders in low light, but I wanted to add some of my own light to both Alex and the tunnel. 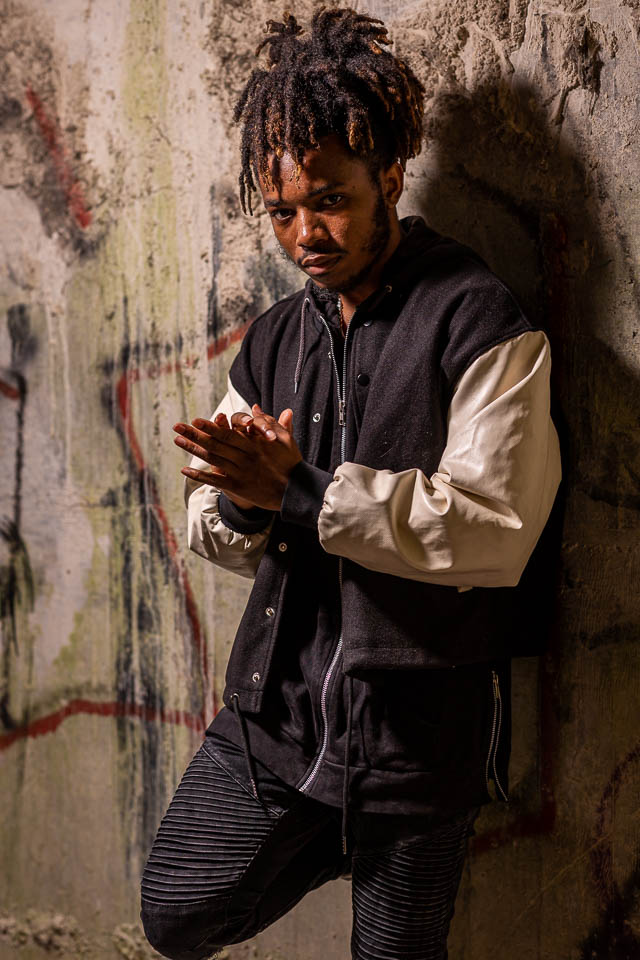 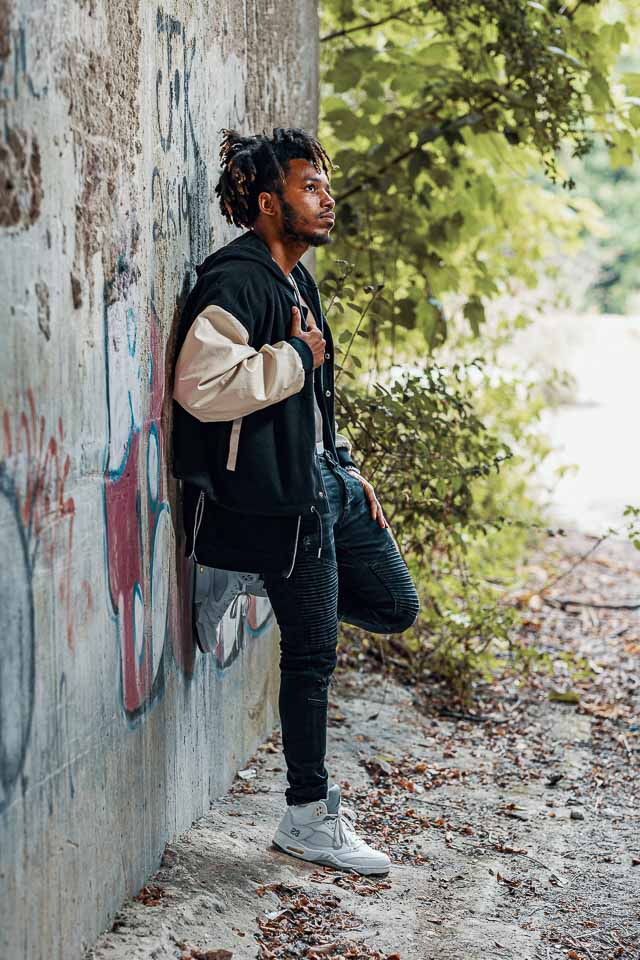 Adding a second AD200 Pro with a coloured filter brought a hint of colour to the tunnel. The light is someway directly behind Alex so I needed to watch that I positioned myself to use Alex to hide the light and stand. The main light on Alex is a Godox AD200 Pro in a Manfrotto Ezybox Speed Lite 2 with the camera controlling the exposure with E-TTL automatic flash. 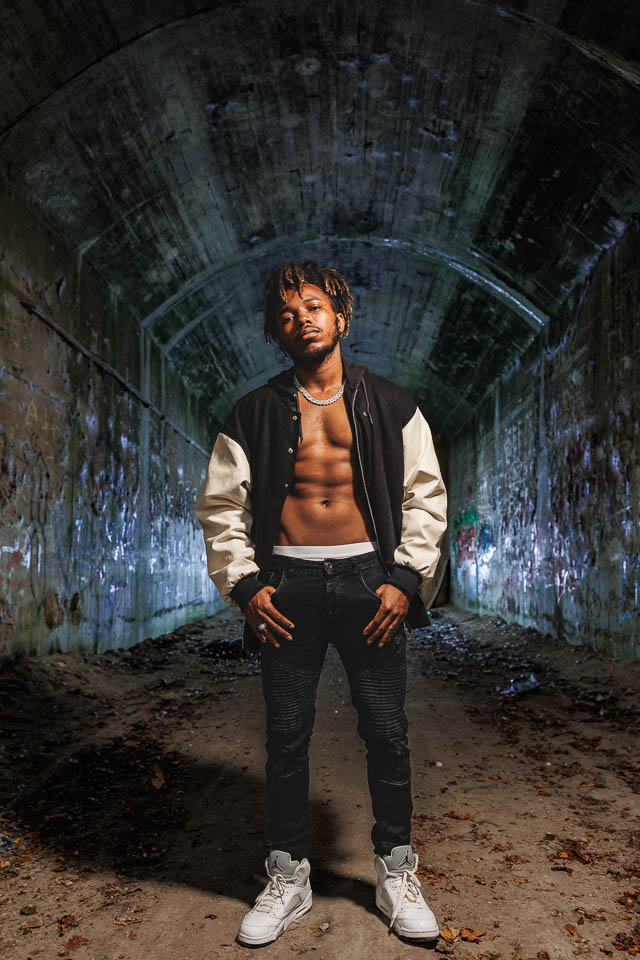 A 1/2 CTB blue gel delivered results so I swapped for a 1/2 CTO orange to give an alternative look. 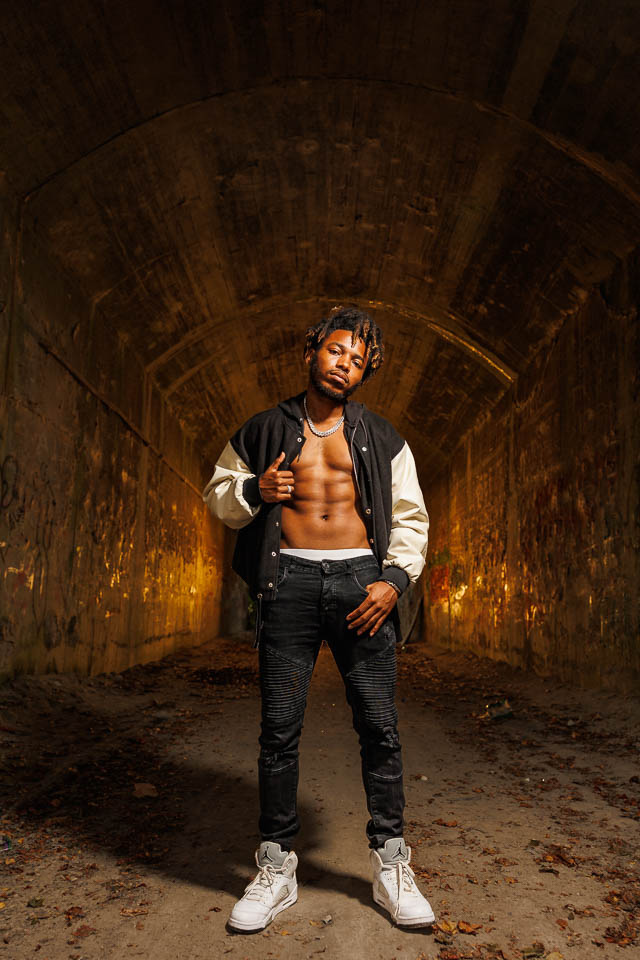 Alex was enthusiastic after seeing the results on the camera, and suggested making more of a night time look by changing to a suit. 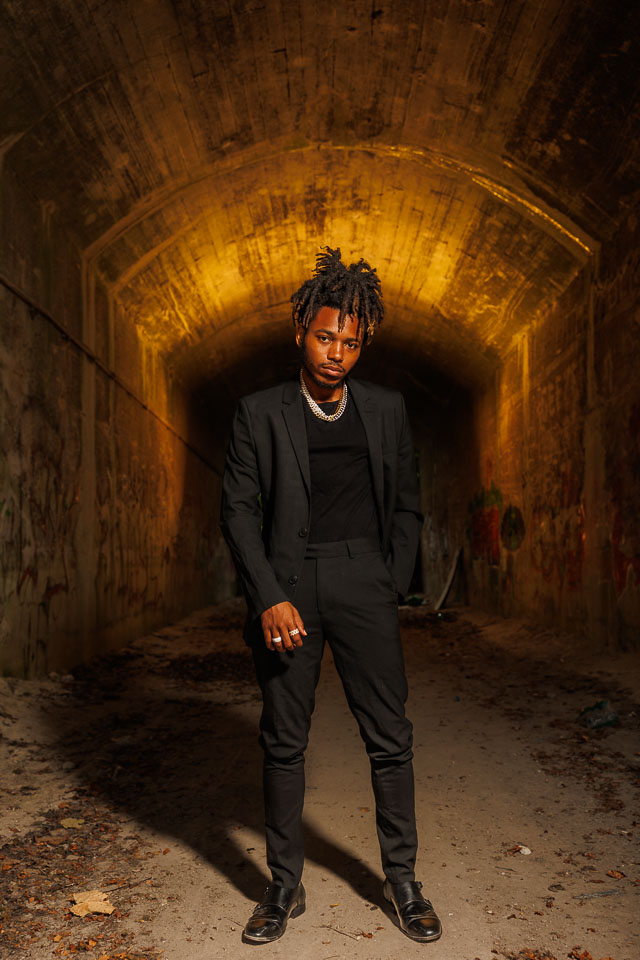 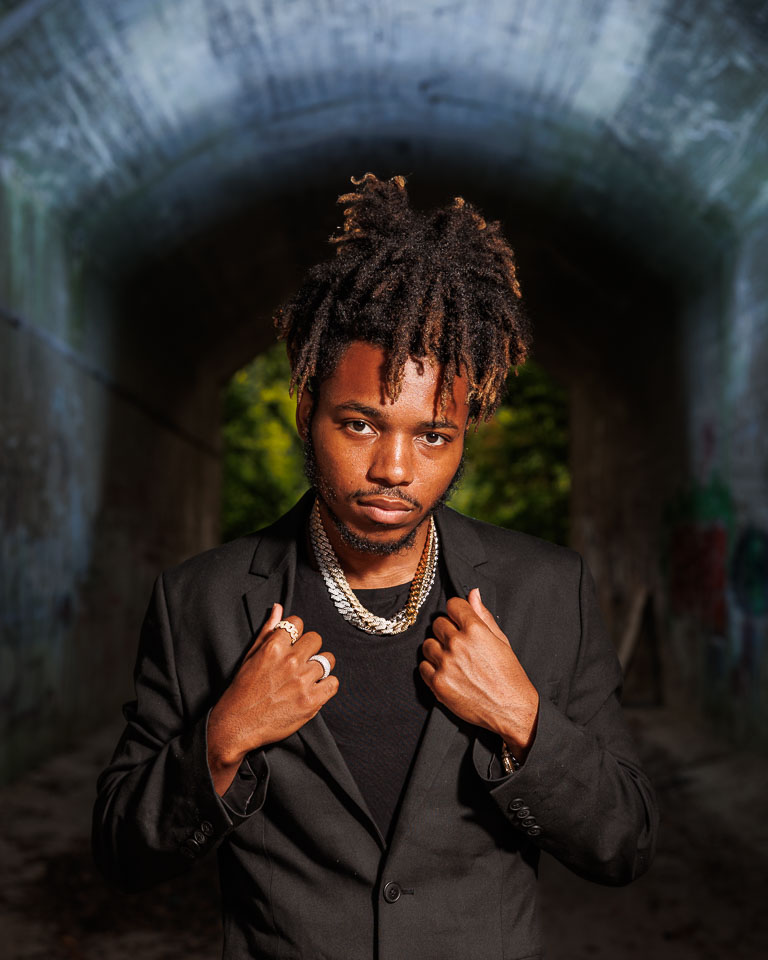 Moving on to a second location near to the water’s edge Alex changed outfits and I switched to a Godox AD-7 small soft box on the AD200 Pro and switched on high speed sync to give a 3D pop to the pictures. My camera is configured to allow ISO 50 which helps when balancing bright daylight with flash on brighter days 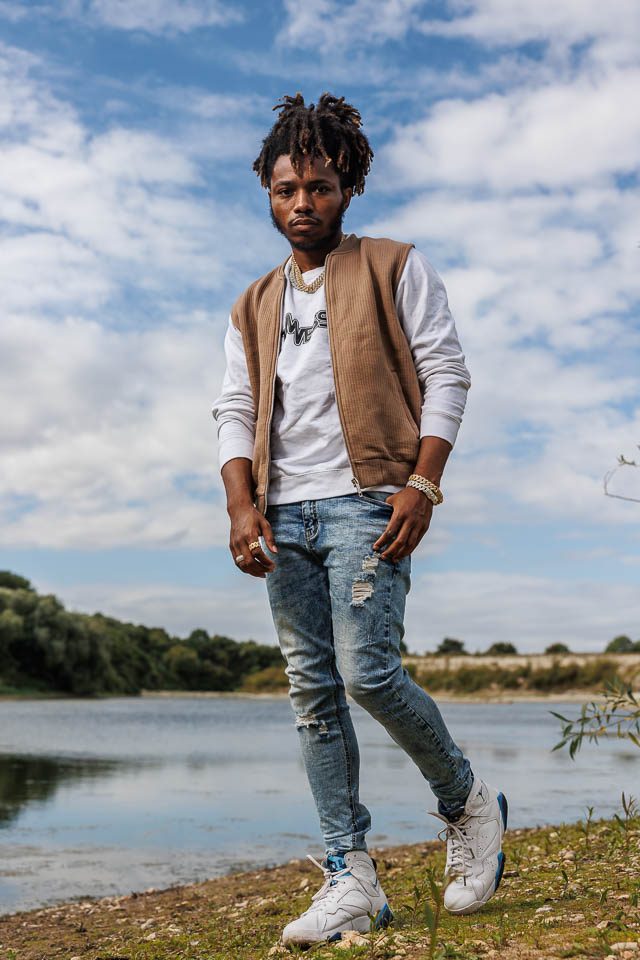 If the location looks kind of familiar, it maybe that you already saw it on the post with Xanthe Rose and also My Little Goth earlier in this series of posts. 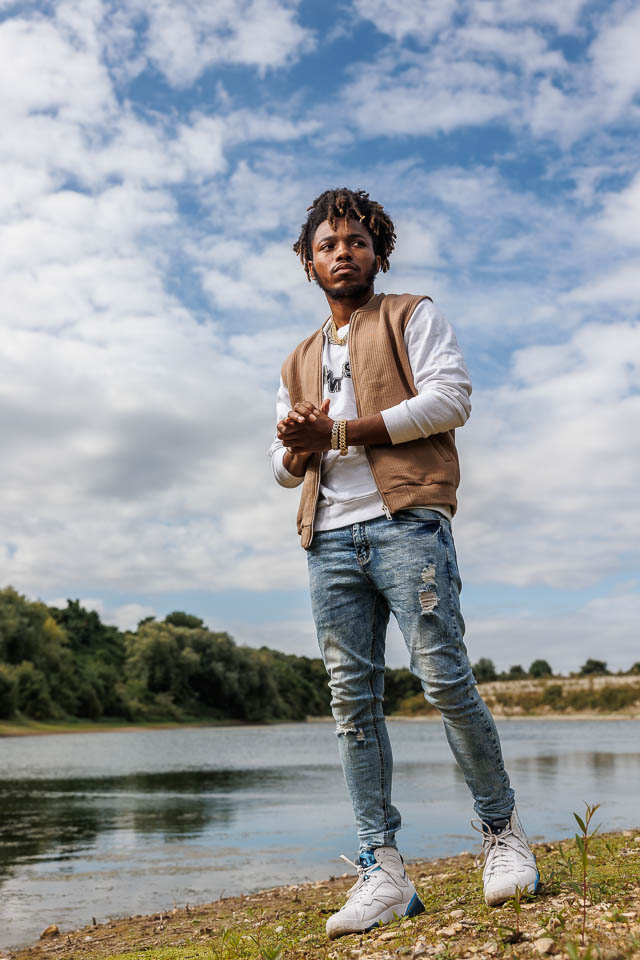 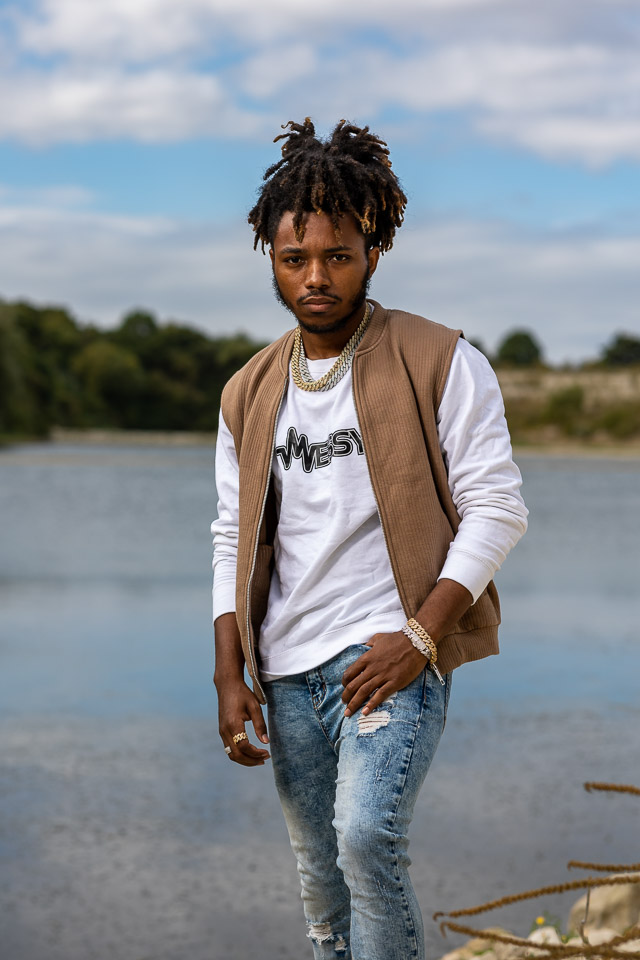 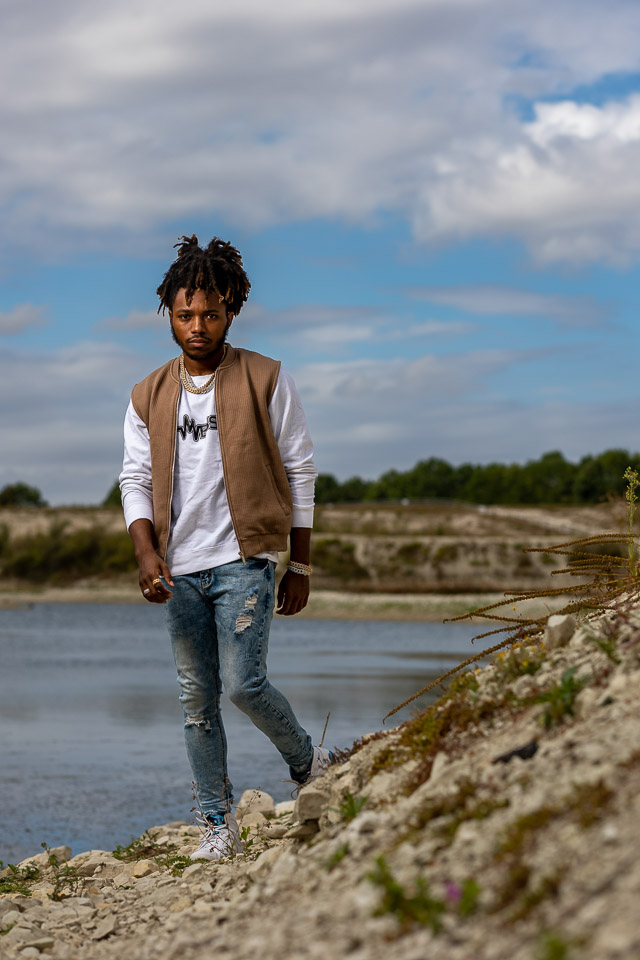 Alex has a sporting background so we moved location again and had Alex running towards the camera. Since it was bright I opted to use the natural light only. Also I wanted a series of shots to choose from, so I switched to electronic shutter mode and shot at 20fps for a short burst as Alex ran towards me. 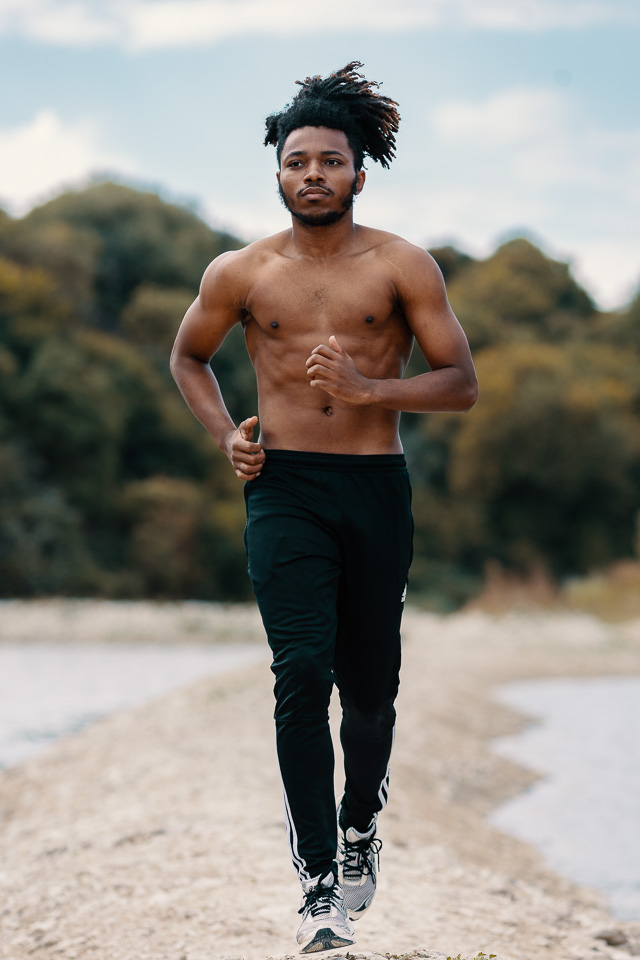 Keeping with the running idea we changed location a final time to give a different background for the pictures. Eye tracking had no trouble keeping up with Alex and reviewing images, you do just look for the foot position first knowing that all the shots are sharp. 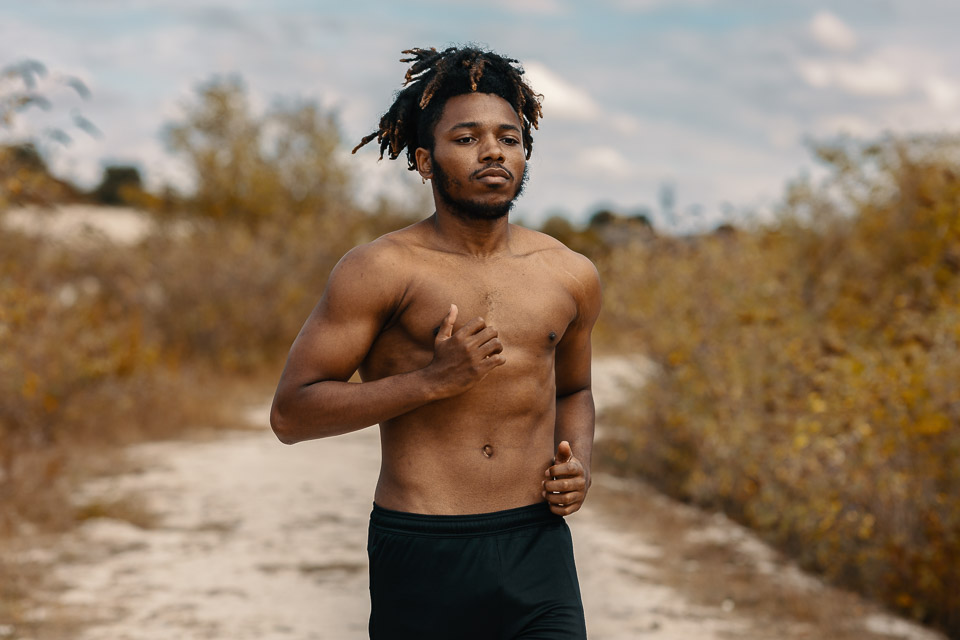 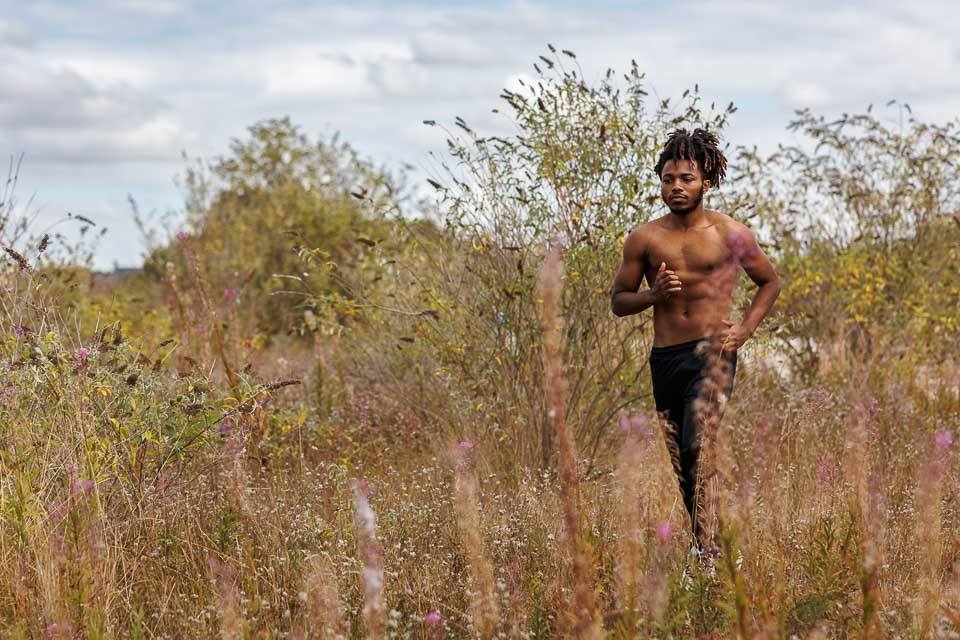 Moving another 30 meters from the last running shot it was time for a a final outfit change and a return to high speed sync flash balanced with daylight. 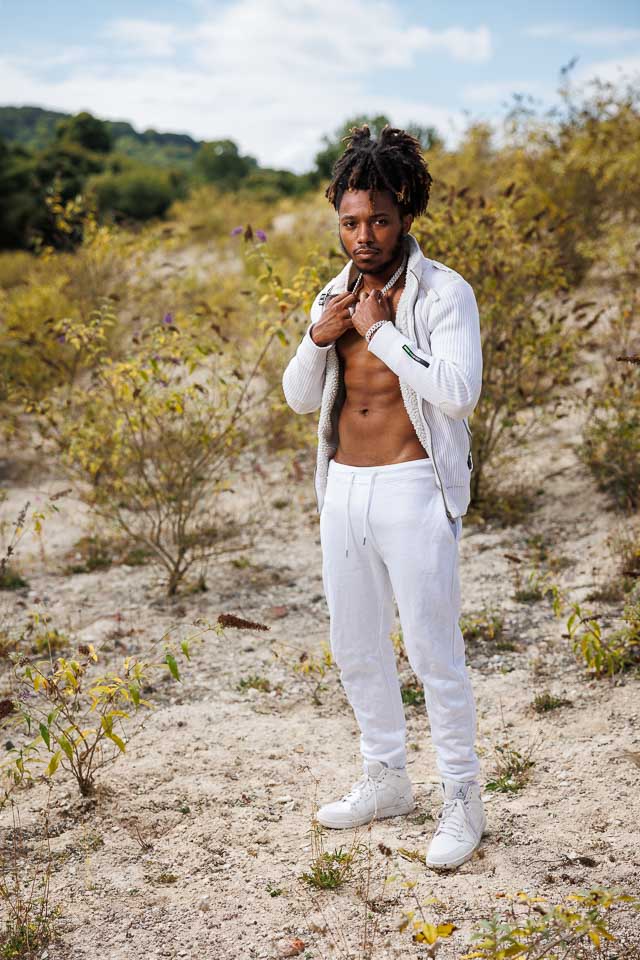 When I shot the first frame I thought that changing to a lower camera angle would make Alex much more imposing against the sky. Also it meant I could add some foreground elements in the frame by shooting through a bush. 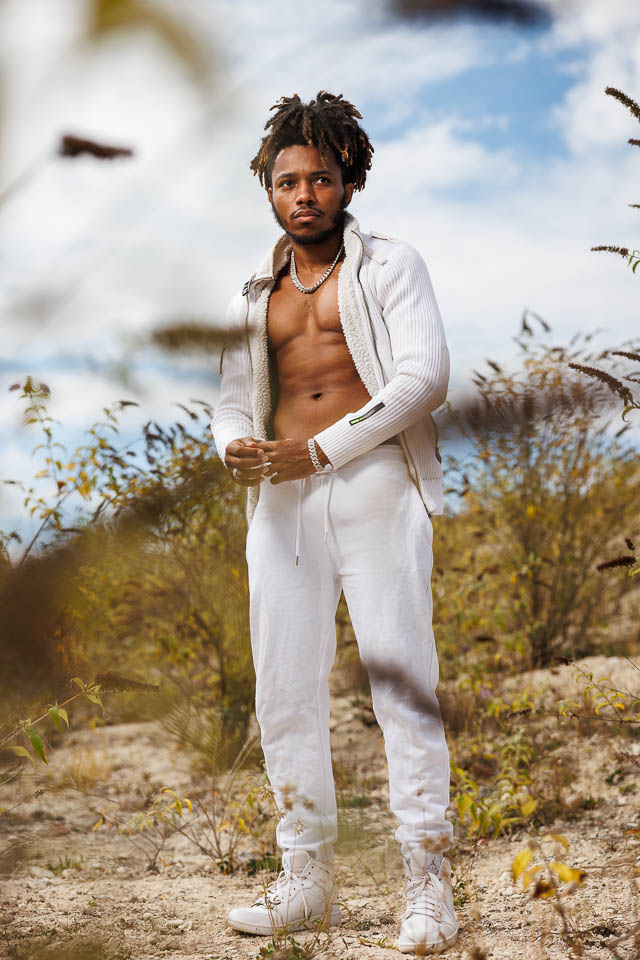 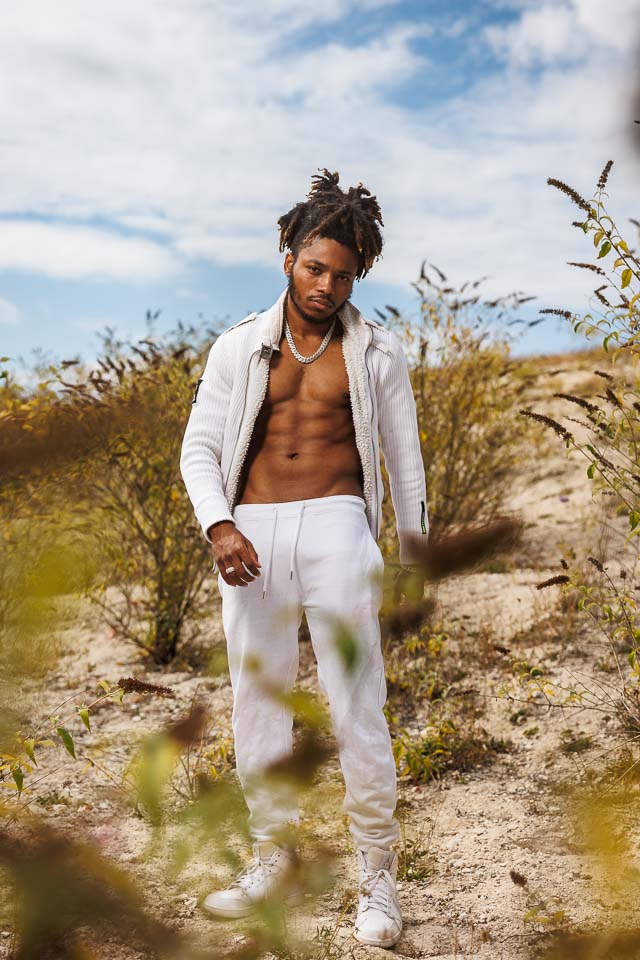 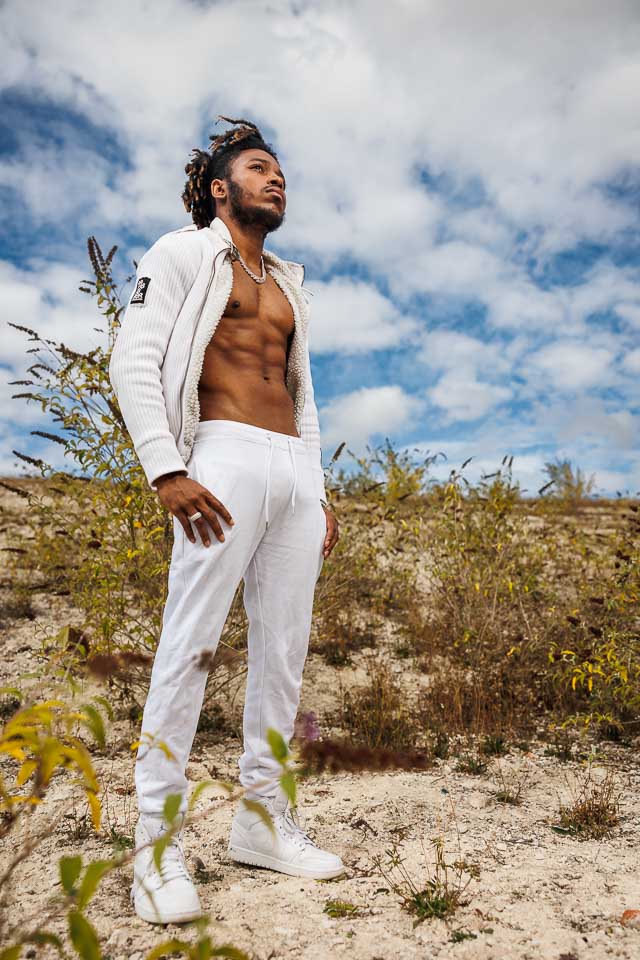 With a huge range and number of images it was time to end the shoot, and a good thing too as the batteries in the Godox AD200 Pro were running out of energy after all the high speed flash sync work.

If you’d like to photograph Alex you can contact him on Instagram. I am working to put a group location shoot in place for later in the year with Alex so keep an eye out for that too.

Day 12 of 12 done. I really have enjoyed sharing a wider variety of my photos from 2022 and look forward to creating more new work throughout 2023.