Outdoor locations can be amazing places to work, whilst a concrete tunnel under a major motorway may not be your first choice, I’m sharing some results and the way they were created.

Working on location, is both a challenge and a gift. It’s a challenge I really enjoy and making the most of a less than decorative location means that you need to bring something extra to the shoot. For this location I’ve brought light, but also considered how to use the location itself to enhance the shots. One of the challenges with this particular concrete tunnel is wind, on a good day the tunnel is cool to work with, on a windy day you have to work fast and add weights on your stands. Fortunately on this shoot I was lucky with evening sunlight, and almost no wind.

It was early evening and we were fortunate that is was quite warm with a sunset at one end of the tunnel. In the past I’ve often used flash or high ISO, but with sunlight I could start with natural light.

Initially I went to see what the light would provide at the “other end” of the tunnel to where we parked the cars. This tunnel is quite long, remember there’s two carriageways of three lanes and a hard shoulder plus a central reservation above. With the sun at an angle I chose a spot just where the transition from light to shadow was visible, never considered it as feathering the sun! On josh’s jacket you get the harsh specular contrast and on his face a smoother tone. Both shots with EF 135mm f/2L USM and taken at f/2.

Clearly a bit of sunlight meant it was  warmer this end of the tunnel than in the depths of the darkness in the middle. 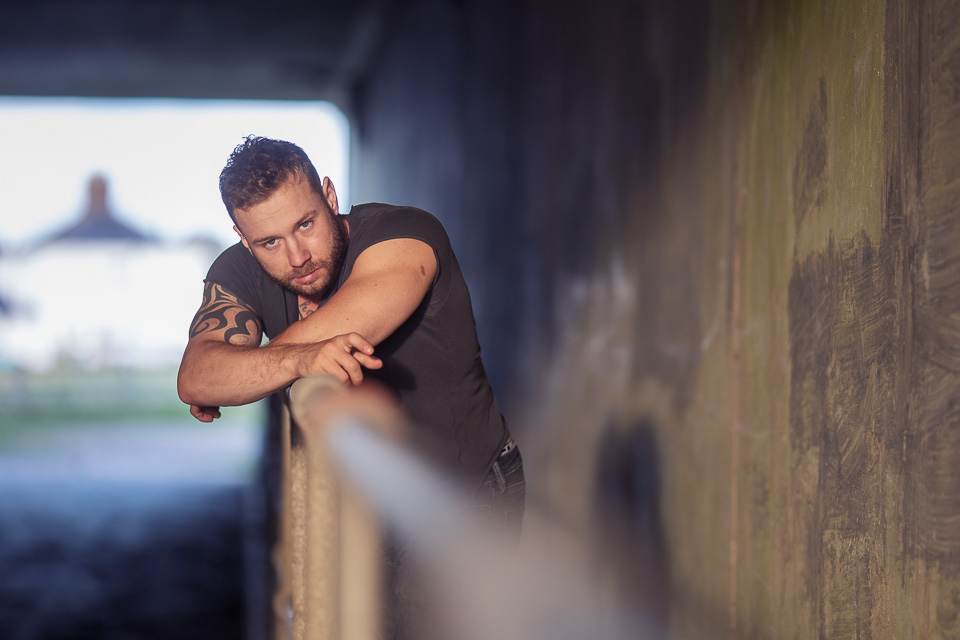 Needless to say the EOS R6 eye AF was completely happy finding Josh’s face and locking on to his eyes. The last couple of shots have had a little more colour processing in Lightroom too.

Josh tried the pose perched on the railing with his feet up the wall, it looked good so we worked with it. 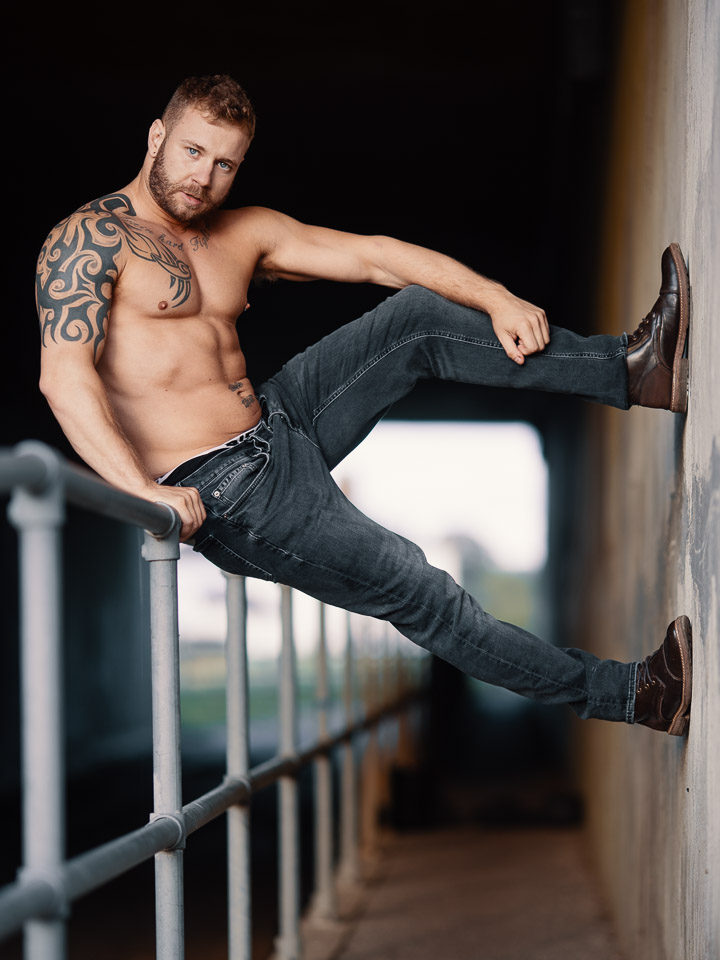 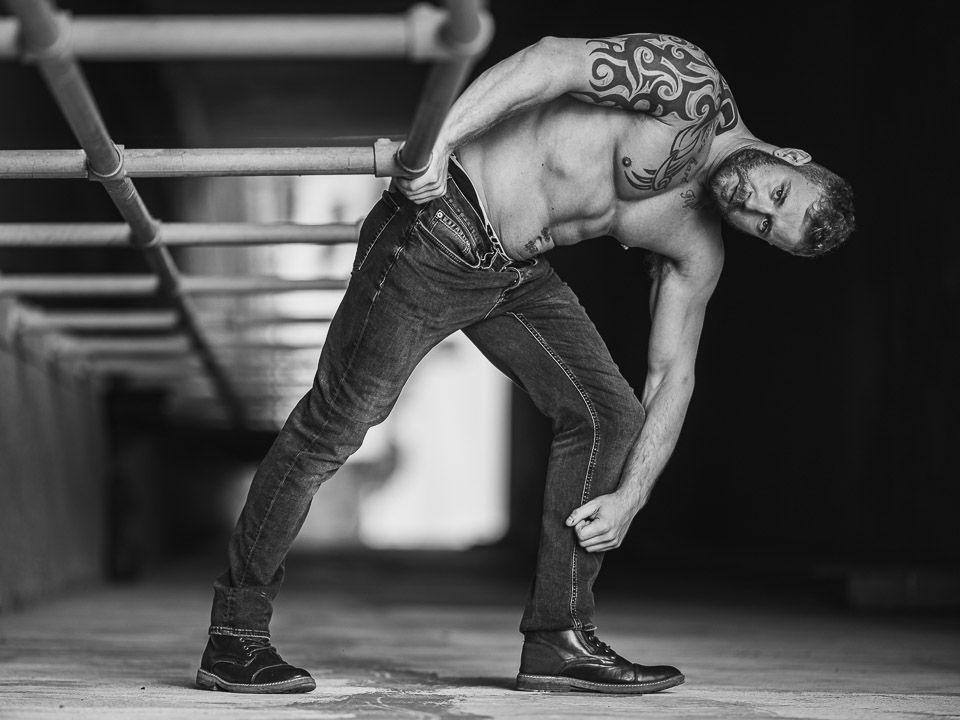 The black and white version is just the same shot, rotated in Lightroom, a little symbolic of the topsy turvy state of the world in this pandemic. With his powerful physique I thought that maybe Josh would be able to turn this world around. 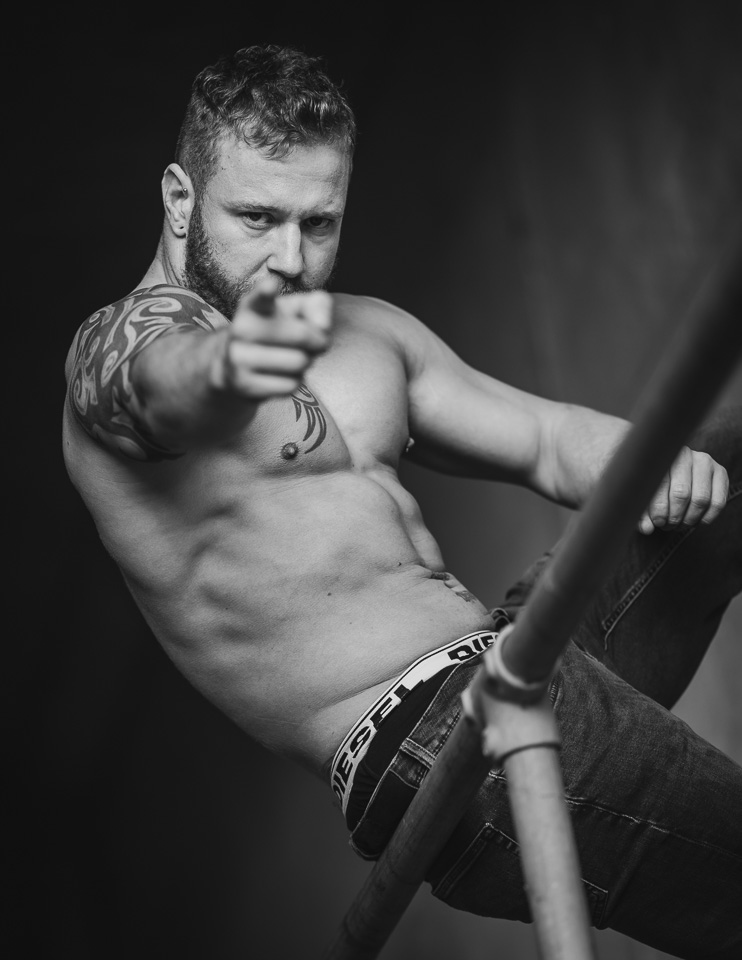 The sun continued to sink in the sky and we moved more the centre of the tunnel. Actually it’s quite dark in there and I setup a small Lastolite Ezybox Speed Lite 2 with a single Speedlite 600EX-RT inside. You can see from the setup shot that it provides quite a spread of light. Josh had change of outfits and we tried something a little more steampunk style. 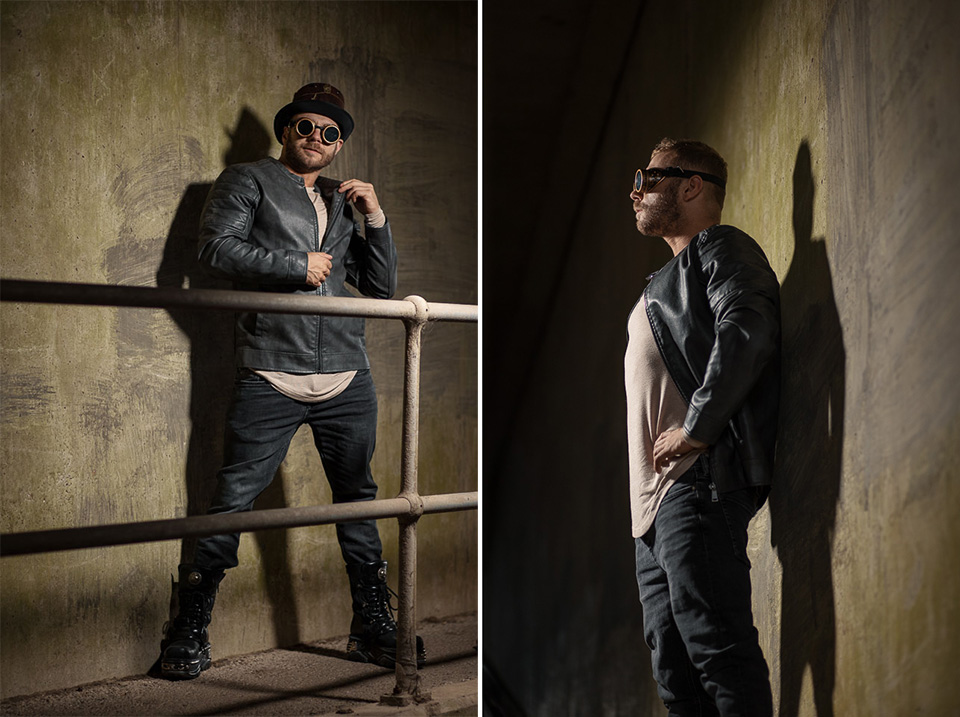 By removing the front diffuser from the soft box and moving it further back the light gets relatively smaller and creates harder transitions between shadow and light. For all these shots I used E-TTL automatic flash exposure and manual exposure on the camera. EF 85mm f/1.8 USM lens on the camera set to manual exposure; 1/250s f/2 ISO 400. ISO 400 helping the flash recycle a little faster. 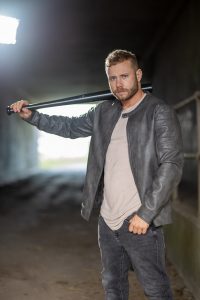 From steampunk Josh changed to a meaner character complete with baseball bat. I wanted to combine daylight and flash. I use the flash in manual power mode behind Josh to provide rim / edge lighting. The Moving a little further towards the last of the daylight and moving the flash + softbox to give a rim and edge light.

To achieve a reasonable exposure on Josh’s face I upped the ISO and lowered the shutter speed. Here’s it’s ISO 1600 and 1/125s at f/2. Once I was happy the backlight was in the right place to file the desired edge I actually shot in black and white Picture Style. This meant black and white images in the viewfinder and on the LCD while shooting. Once in Lightroom I changed the colour profile to the Adobe supplied B& W 11. 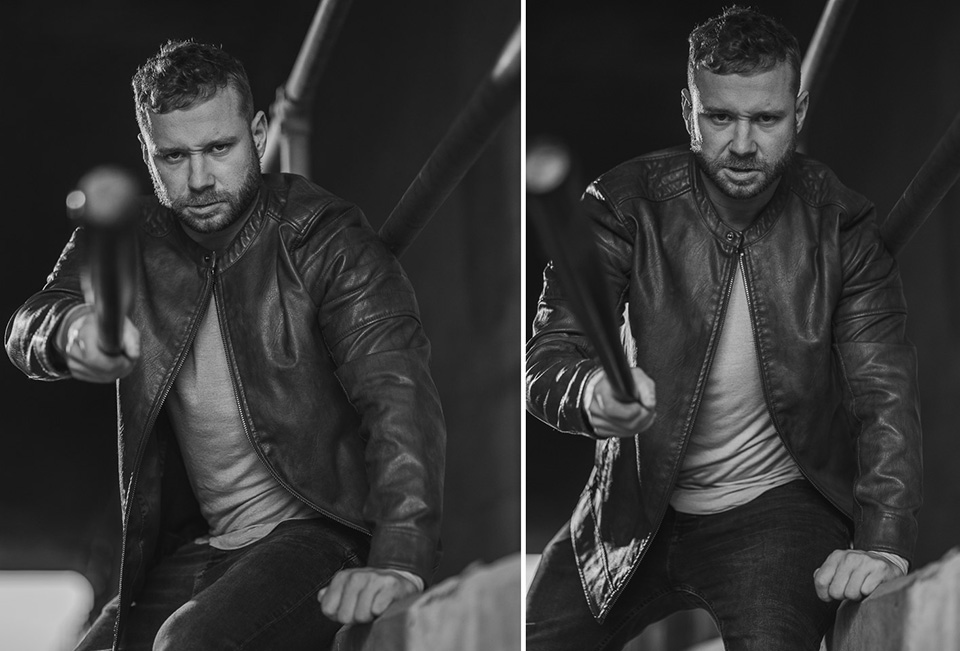 I asked Josh to turn round and face the flash that was the backlight before, and then setup a second Speedlite 600EX-RT with no modifier behind him to the right of the frame. Then all I needed to do was consider how the daylight behind him was going to be captured. Manual exposure on the camera, 1/250s f/2 ISO 400 and the two flashes controlled independently using group mode. The backlight is set for manual exposure and the main light on Josh is E-TTL automatic. The wind in the tunnel handily blowing some dust around to be picked up in the light. 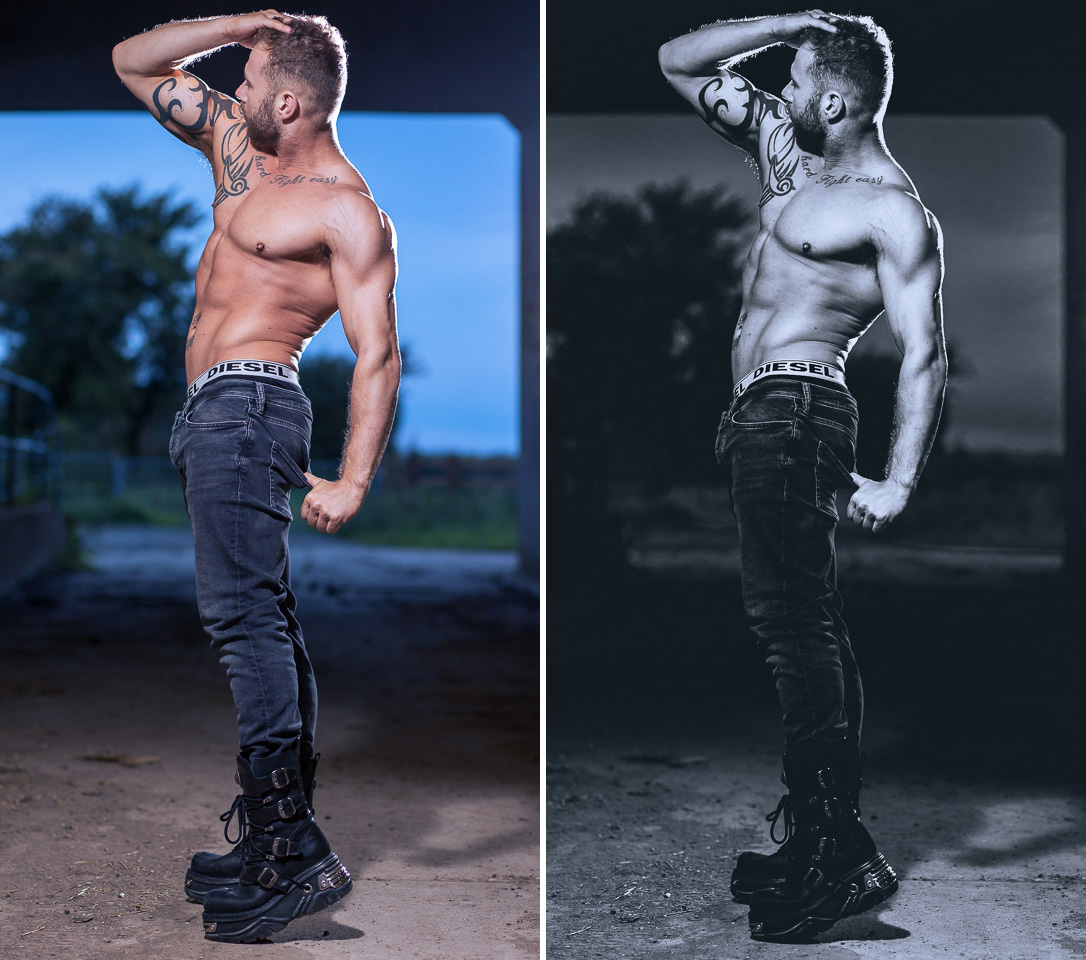 I envisaged these in colour and shot them in colour but quite like the black and white too. By pulling the blue channel down it darkens his jeans as well as the sky behind him.

Ambient light and flash in the dark 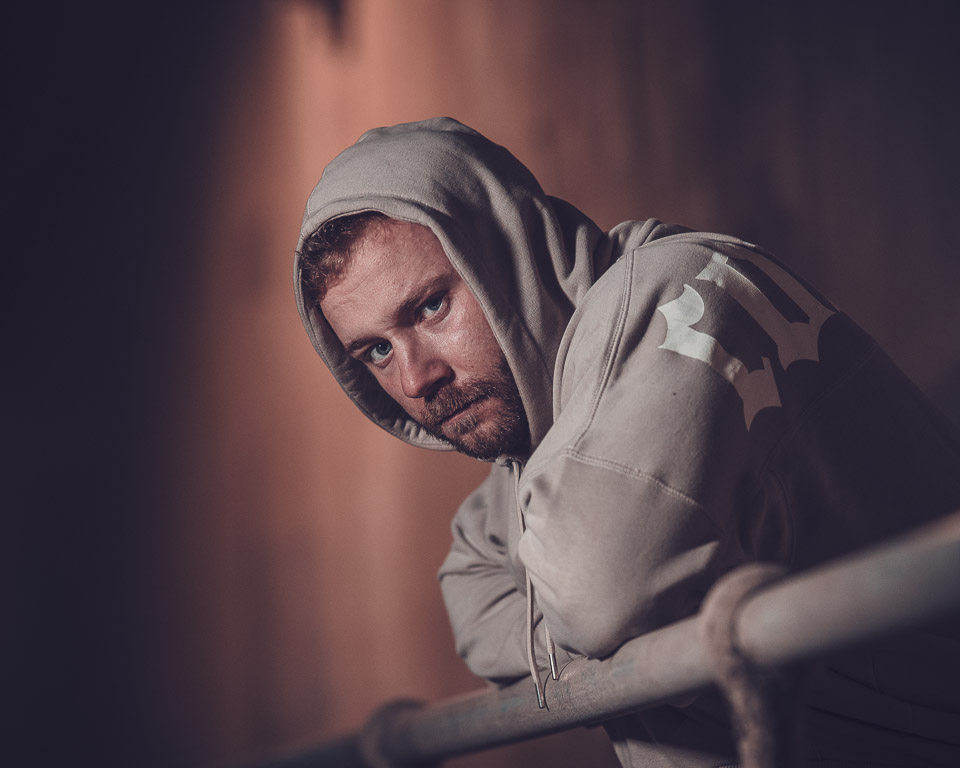 Evening was nearly over, the light in the tunnel was getting dark and that means the automatic lights switched on above us. These light have challenging colour temperature, so the combination with flash can result in odd colours. It’s quite easy to reduce their effect in the shots with shutter speed and ISO, but I wanted to leave something there. ISO 1600, 1/100s and f/2.8 was the recipe with E-TTL flash. 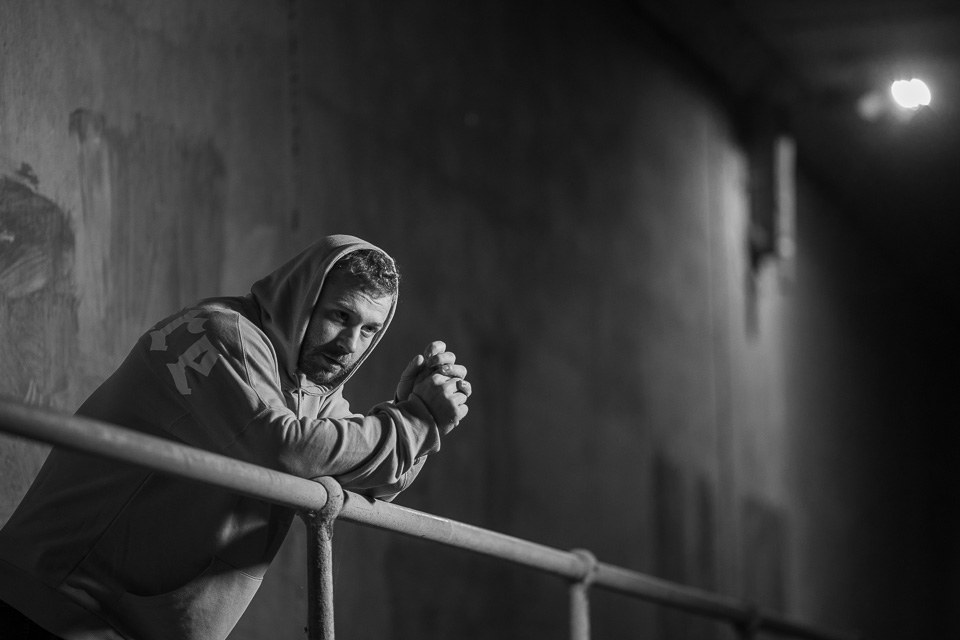 For the final shot, I moved to monochrome and pulled the diffuser off the soft box again. I’m trying to mimic the feel of the light that is in the top right of the shot os that the light on his face could be coming from a similar lighting the tunnel but not in the shot. It also meant raising the position of the Speedlite too.

There was just 69 minutes of shooting time from the first frame to the last. For gear I use the EOS R6 with EF 135mm f/2L USM and EF 85mm f/1.8 USM lenses plus a pair of Speedlite 600EX-RT lights, two stands and one small light modifier. It was a great shoot with many excellent and varied frames.

Huge thanks to Josh who you can find on UK modelling site Purpleport.

The same tunnel was the location for my Halloween scary clown shoot a little while back.