Canon has announced an update to the Speedlite Transmitter ST-E3-RT, it’s called the ST-E3-RT (Ver.2). Launched back in 2012 this is the first update in almost nine years and adds features when it’s used with the latest cameras and Speedlite EL-1.

Second curtain sync flash – something Canon has never had before, though it’s available with independent flash systems.

1/8192 power level setting when used with Speedlite EL-1 – you’re going to need the flash really close to the subject to benefit from this, maybe for macro setups.

For me the best bit of news is that my existing ST-E3-RT can be retrofitted with an update to give me the new features. Though it means it will have to take a trip to the Canon service centre to get it.

I’m intrigued to see how the 2nd curtain sync and FE memory options help with my Speedlite work. I know that the inexpensive Yongnuo YN-E3-RT II includes second curtain sync in manual mode, does the Canon also do it in E-TTL? Secondly I would like to see the FE memory function, it could be great with portrait setups but I wonder how or if it handles multiple off-camera setups. I’m certainly planning to get my ST-E3-RT updated. 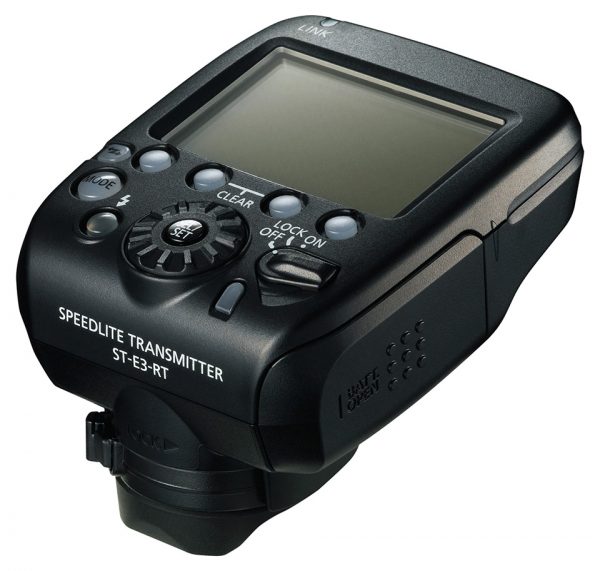 Other new features of the ST-E3-RT(Ver.2) include support for the Speedlite EL-1’s low-power 1/8192 micro flashii, and for photographers who use manual flash, the transmitter boasts a new FE Memory mode.

Through introducing radio wireless transmission and second-curtain synchronisationiii, the ST-E3-RT(Ver.2) releases the flash at the end of a long exposure. As a result, it helps photographers produce natural looking images when capturing moving subjects. The ST-E3-RT(Ver.2) offers this feature as a new wireless option, giving users flexibility in a range of shooting scenarios.

When shooting with a large aperture and/or high ISO speed, the flash level can often overpower the subject and scene. This forces the photographer to change settings or set up, ultimately losing the look they desired. When partnered with the Speedlite EL-1iv, the transmitter’s 1/8192 micro flash adds beautifully subtle nuances of light without disrupting the atmosphere and ambient light reflected on set. This feature is perfect for fashion and portrait photographers looking to capture scenes with a natural atmosphere.

Building on the original transmitter’s flexible qualities, the ST-E3-RT(Ver.2) supports FE Memory – offering a quicker and more convenient manual flash set up. Alleviating the need for multiple test shots, professionals now have the option to perform an initial shot in E-TTL mode, capturing the E-TTL flash settings. Users can then switch the Speedlites to manual flash to allow for manual adjustments where needed – all whilst retaining the original E-TTL settings.

Canon Europe is also providing a chargeable update for existing ST-E3-RT users. Those with the transmitter can send it to one of the listed Canon Service Centres to be upgraded to include the new additional features and capabilities of the ST-E3-RT(Ver.2).

For more information about the ST-E3-RT(Ver.2) and its compatibility, please visit:
www.canon-europe.com/cameras/speedlite-transmitter-st-e3-rt-v2/