AVAILABLE LIGHT IS JUST NOT NATURAL 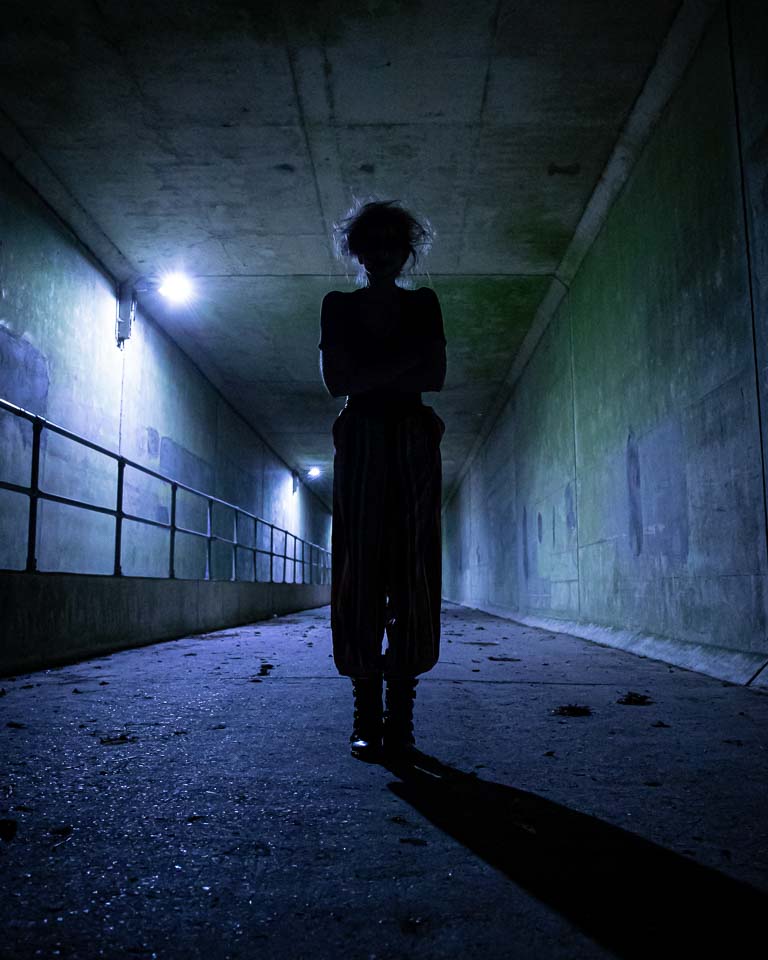 You know the plan, you head out in to the night, turning the ISO up in the vain hope of catching some shots with available light.

In your head it seemed like the natural thing to do… then PANIC sets in.

The NOISE in your head says no, you cannot go that far. 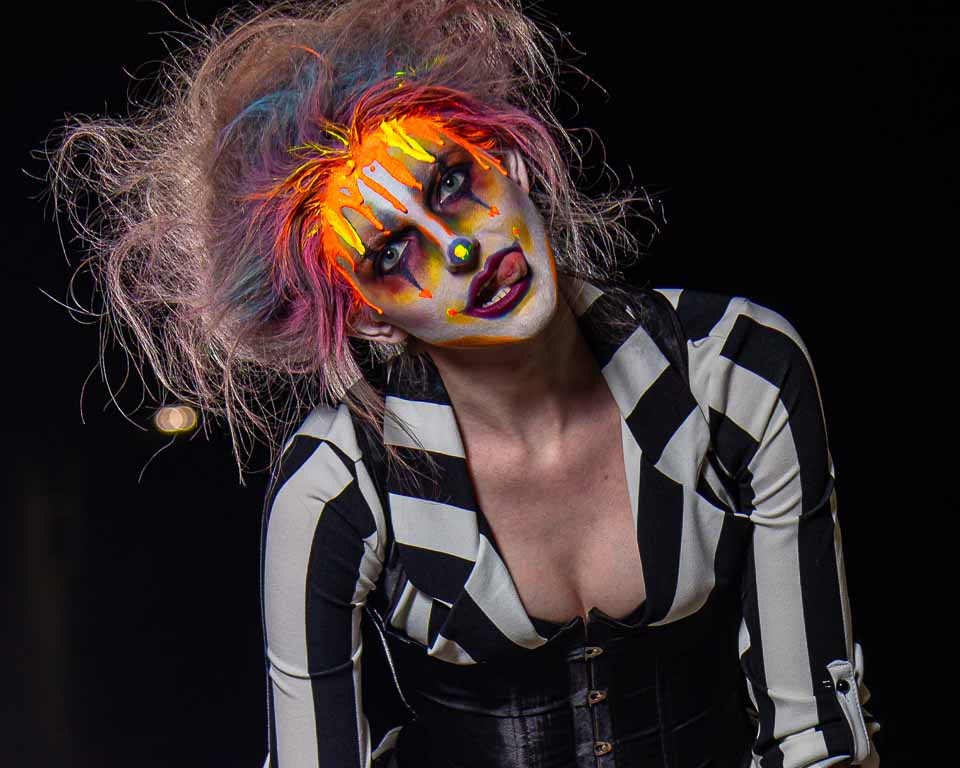 What if you start MAKING PHOTOS, by flexing your creative muscles?

Also let me introduce you to the best scary clown ever, Becky. 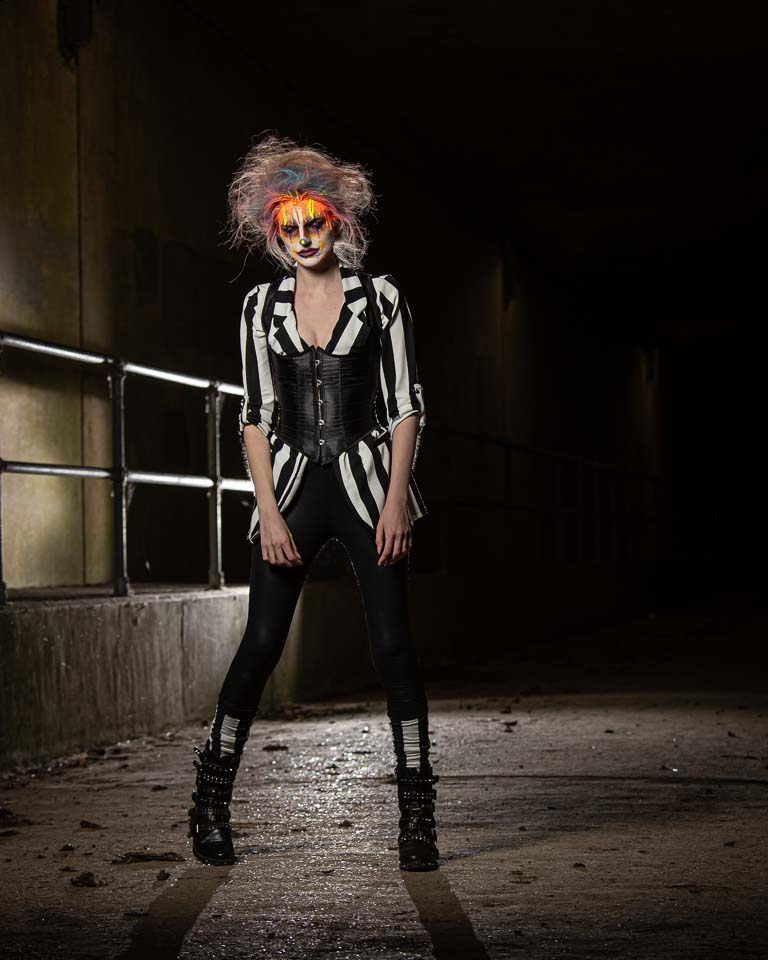 This was my starting point, adding some light I could control. I put a grid on the softbox to light Becky’s face and put another flash way down the tunnel behind her to give some light in the tunnel and a rim-light too. The challenge was to ensure I moved to keep that light behind Becky.

On the EOS R I selected manual exposure mode and dialled in 1/200s, f/5.6 and ISO 400 to eliminate the ambient light. I triggered the Speedlites with the ST-E3-RT transmitter set to group mode. Main light in the softbox was in group A and E-TTL, light from behind is group B and in manual at around 1/8 power.

The big softbox and my “expensive” flashes are supported by an Avenger C-stand with extension arm. The other flash at the back of the shot is clamped to the railings with a Manfrotto Super Clamp. I zoomed that flash in to around 50mm to limit the spread of light.

I hadn’t really given much thought to focussing on the EOS R, I did switch off eye detection, but left face detection and tracking active for the rest of the shoot. Do make sure you have firmware 1.4.0 or later in your camera though. 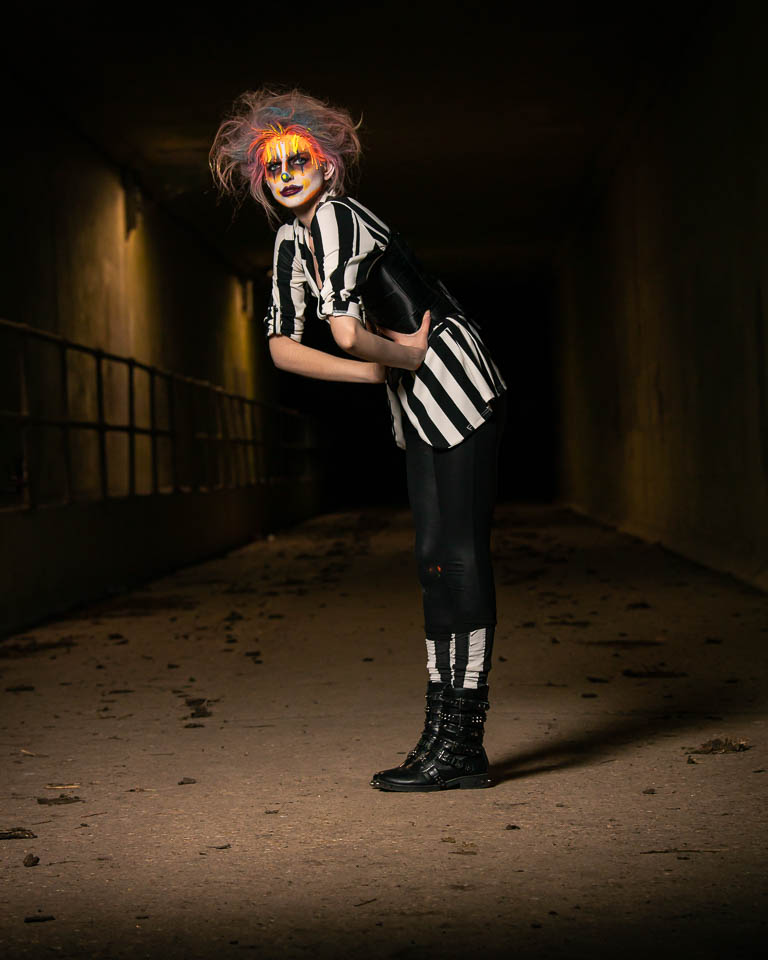 Opting to switch off the flash at the back of the shot, and just using the octa with grid gave another look. This is a simple one light automatic flash picture. I selected ISO 1600 to retain the hint of detail from the lights in the tunnel. To all the photographers I see who instinctively chose ISO 100 when they use a flash, you can use ISO 1600 with flash, and your batteries will thank you. 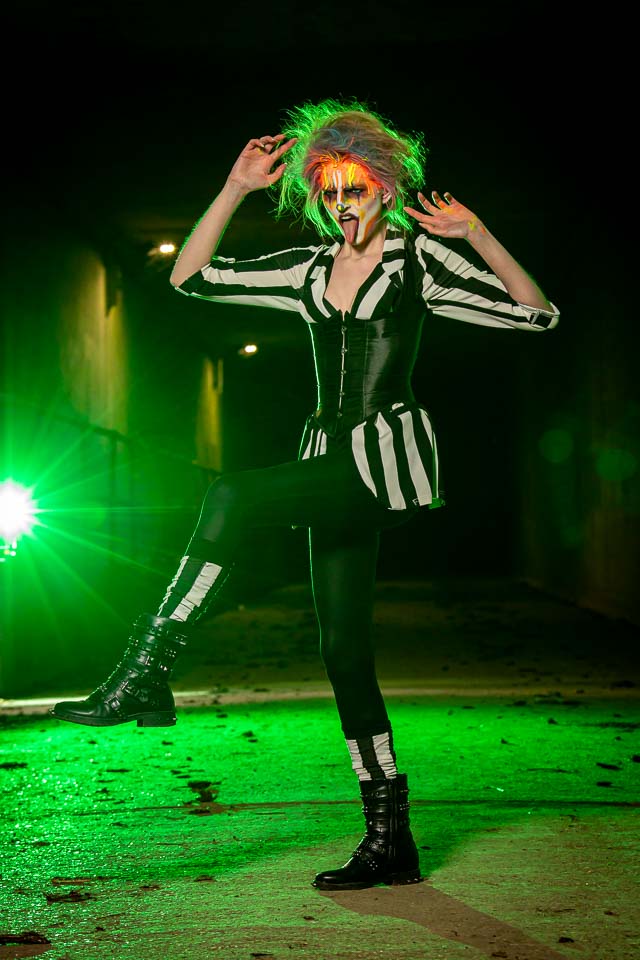 One of the most simple accessories you can bring to a flash is some coloured filters. Here a green filter, about the size of an A4/letter sheet, is draped over the flash. Not ideal but I forgot the tape. You can see that there’s a patch of white light on the floor in front of the flash.

You also have to be careful with the location of the light, remember I can’t see it at all in the darkness before pressing the shutter.

Once the lights are setup, it’s time to move you as well as the model. By repositioning myself further back in the tunnel so that the green light becomes the main light then the look is totally different… I’v also played with the colours in Lightroom to add a somewhat teal and orange preset I created a while back. Hey it’s Halloween all kinds of tricks are permitted. 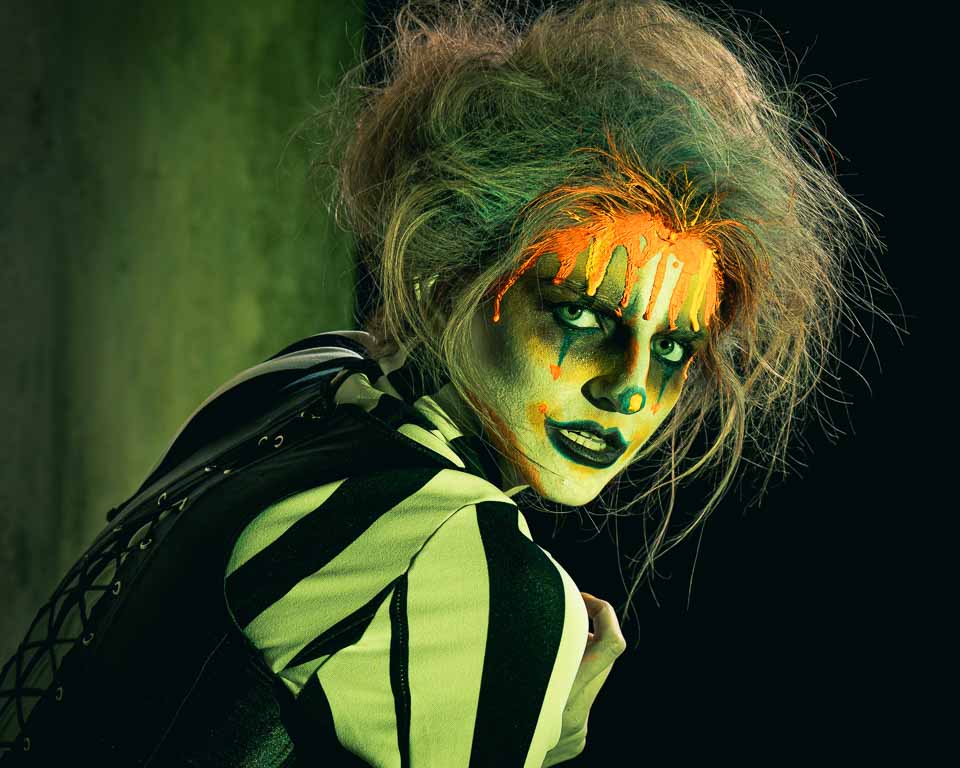 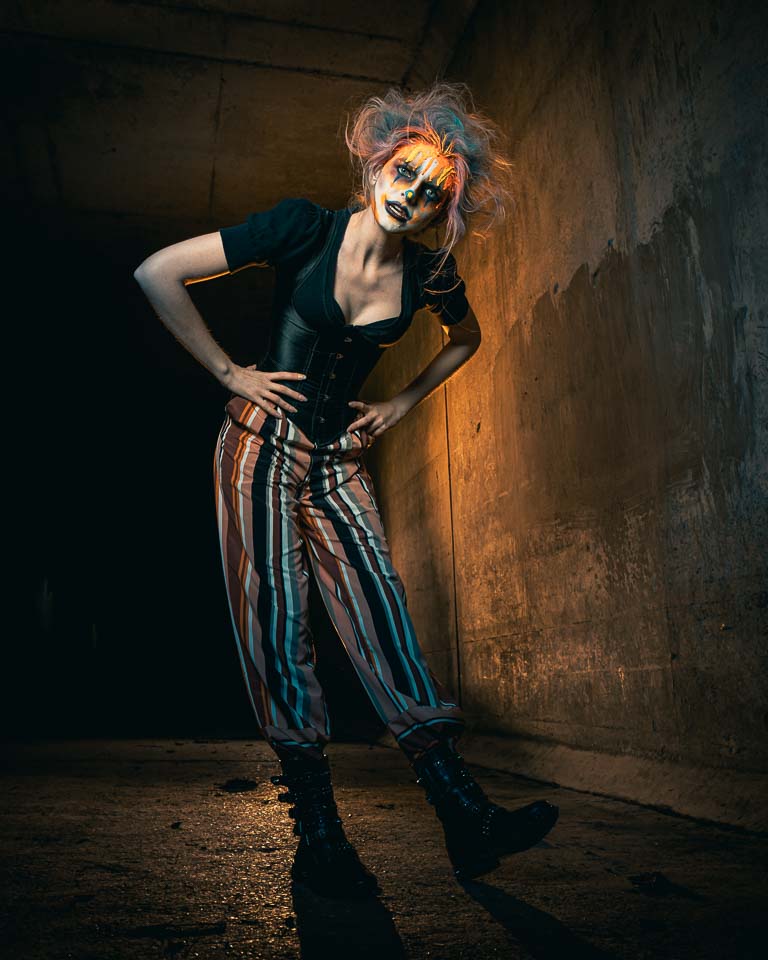 I had also packed my Spiffygear Light Blaster pre-loaded with a tree branch gobo, and an EF 24mm f/1.4L USM lens. 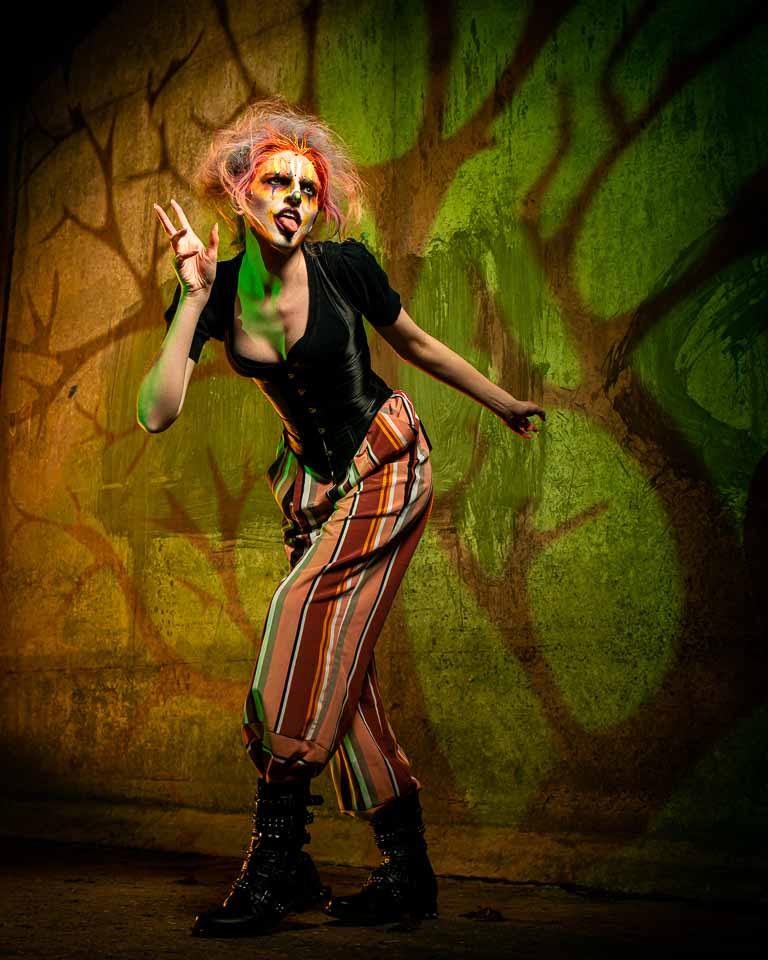 So now I’m up to three separate groups of flashes, the main light still the white Lastolite Octa with grid, an orange gelled back light and the Light Blaster. I actually wedged the corner of a green filter gel in the light blaster that gave rise to the mixed orange and green tones on the wall… 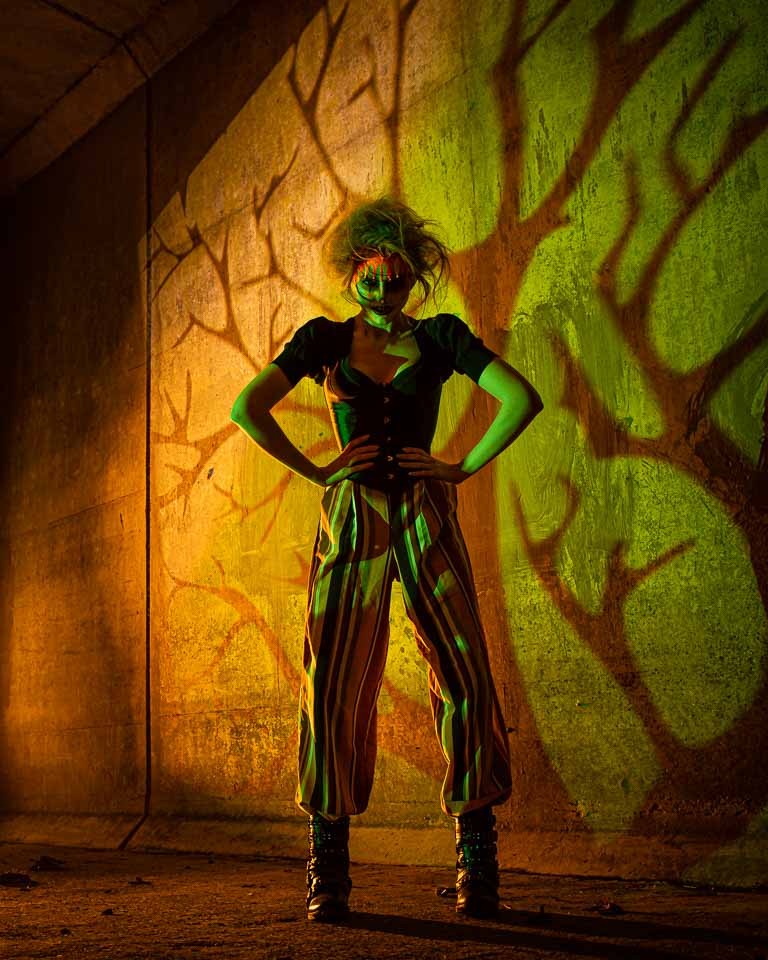 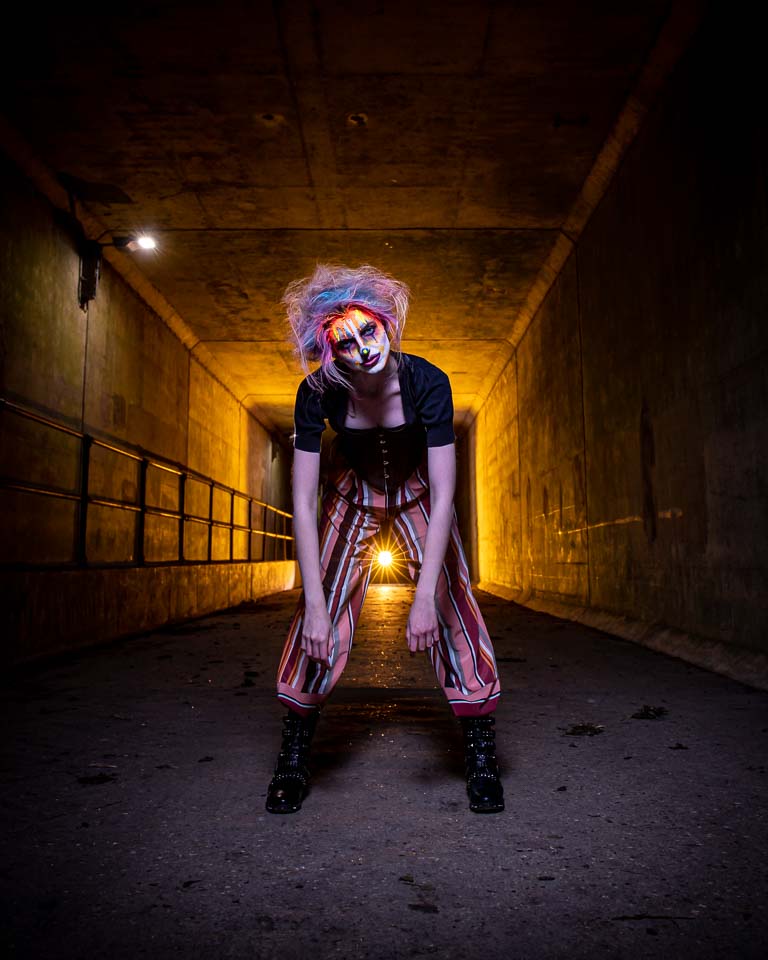 For this shot I moved the orange gelled light way back to the other end of the tunnel, and turned off the Light Blaster. 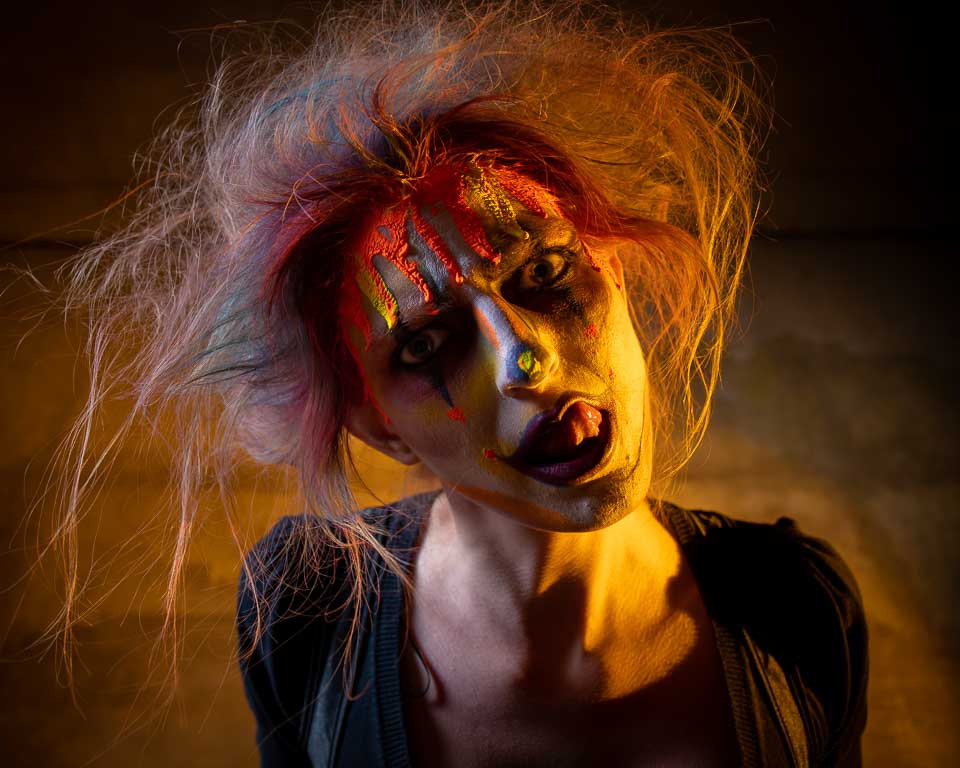 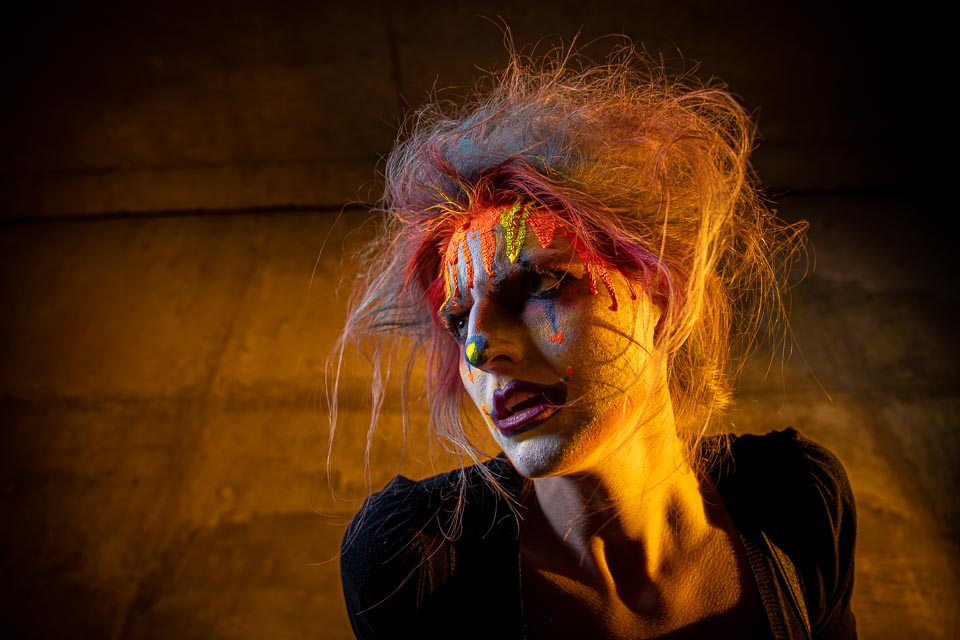 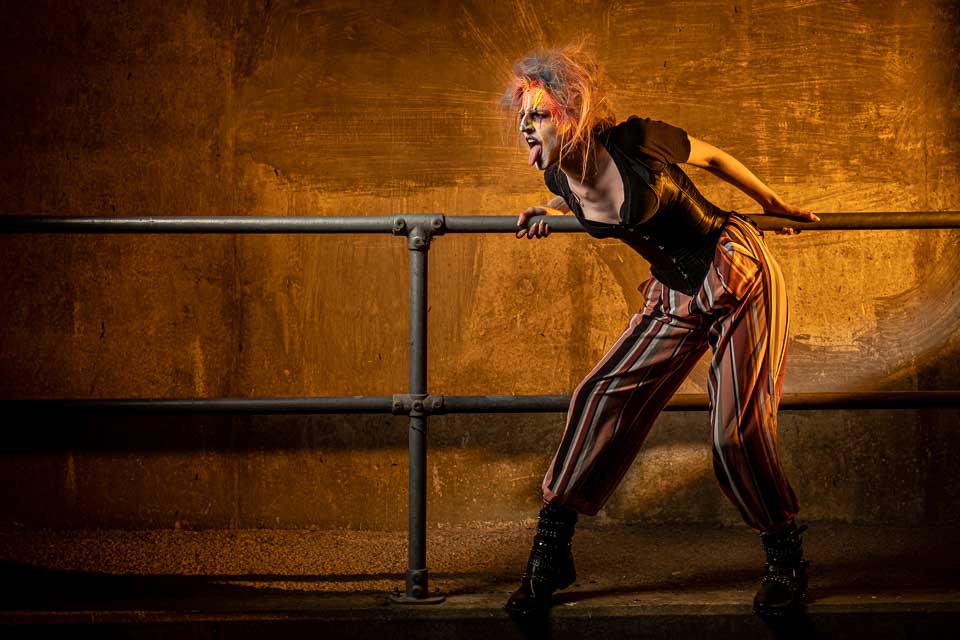 CREATIVITY REQUIRED AT BOTH ENDS OF THE LENS

I was absolutely stunned by the creativity of my model Becky for her work is vital to make these shots possible. From an initial “lets have a shoot” email to the end of the shoot was less than 36 hours. The scary clown look, make-up, costume was all down to her. Her years of modelling experience shows in her incredible posing skills and expressions.

To make epic, you need skills at both ends of the lens.

Photographers are often told that to make better pictures you have to put more interesting subjects in front of your camera. I’m sure that leads to fantastic travels, but does the photographer learn anything at their end of the lens?

Putting the work in to use your camera more effectively, make use of it’s functionality is essential in order that you make better photos with subjects closer to home too.

Stands and grip from Avenger and Manfrotto.