An interesting update to the EOS 80D, that see the return of the joystick / multi controller to the mid-range cameras. Last seen on the EOS 50D, it’s ideal for selecting AF points while looking through the viewfinder. Can’t wait to see it reappear on EOS R series cameras too!

The new APS-C sensor brings a significant bump in resolution to 32.5MP, and adds 4K video without a crop. All movie files are stored with IPB compression, unlike the EOS 80D which had an option for 25p Full HD in ALL-I compression. What you do gain is an ability to shoot 100/120fps FullHD video for slow-motion sequences. The frame rate is increased for action photos, and the flash sync speed remains at 1/250s.

Speaking of flash you can still use the pop-up flash as a Speedlite sender (master) to control up to two groups of off-camera flashes with optical wireless. The push button to raise the flash does so mechanically, meaning it no longer automatically calls up the flash settings, which is a shame as I use that feature a lot on the EOS 80D and EOS 7D Mark II.

If you’re contemplating an update from an older EOS 60D or 70D I think you’ll find the EOS 90D a worthy successor, and all your batteries and cards will still fit too. 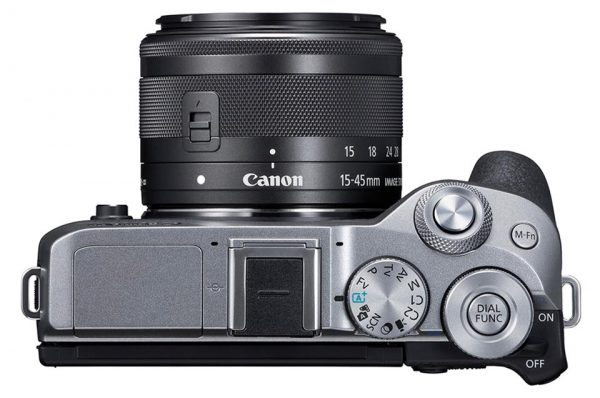 This is  the first EOS M series camera that I actually felt comfortable operating. Other M-series models have always felt a little more “PowerShot” in their ways of working. The EOS M6 Mark II is responsive and feels much more akin to a DSLR in it’s handling and operation. Theres’ a choice of colours, all-black or silver and black.

Anyone else notice the presence of Fv mode on that mode dial? Yes flexible priority exposure mode is a feature of the EOS M6 Mark II. 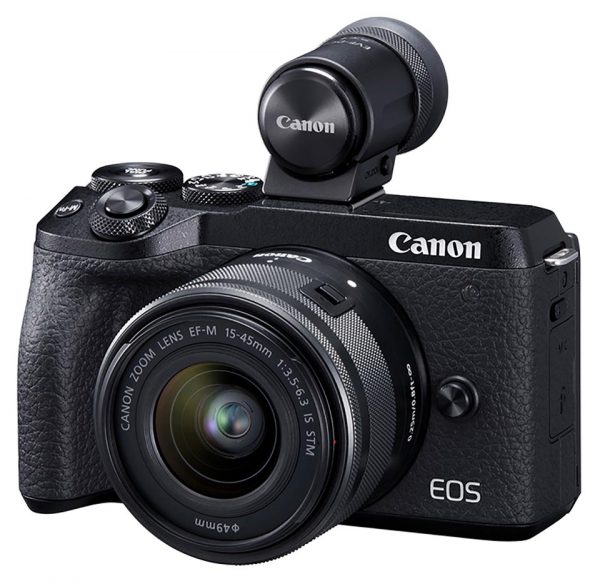 This camera will be available in two kit configurations, one with the EVF-DC2 that sits on the hotshoe. Like this the EOS M6 Mark II is to all intents and purposes a replacement of the EOS M5 too. Adding the viewfinder makes additional menu items appear for touch and drag AF as seen on the EOS R/RP and EOS M5 before.

RAW burst shooting captures frames at an incredible 30 fps with the option to record 15 frames from before you press the shutter. Either way all the frames are stored in a single image file on the camera that you can then playback and extract the best frame as a single file. You either need to do this single frame extraction on the camera or with the latest version of Digital Photo Professional. RAW images captured in this way are smaller, lower resolution. If you want full resolution files individually written to the card, then 14 fps is the limit.

Pair the camera with the superb EF-M 32mm f/1.4 STM and or EF-M 22mm f/2 STM lenses for a compact camera that would be ideal for street photography.

At last an M-series camera I quite like… but it brings a dilemma. Can I really afford/carry cameras with three different lens mounts? EF-M for the most compact, EF/EF-S for DSLR which is the best for action, wildlife and sports shooting with the biggest range of lenses, and RF for the future with mirrorless full-frame. So far I’ve only got EF/EF-S lenses 😉

Canon strengthens the EOS line up with a new mirrorless and DSLR, delivering high-speed shooting and incredible resolution

Canon Europe announces the launch of two high-speed, high resolution cameras – one DSLR and one mirrorless – designed to take enthusiast photographers to the next skill level. Canon has a camera to suit any user – EOS 90D is a fast and reliable DSLR, with a familiar, robust body perfect for sport and wildlife photographers. For everyday life, EOS M6 Mark II is a compact, yet powerful mirrorless delivering beautifully sharp images – for photographers on the move. Alongside the two new Canon RF lenses announced today, these high-quality, fast models build on Canon’s popular EOS 80D DSLR and EOS M6 mirrorless cameras to provide a full choice for enthusiasts across the entire line-up. 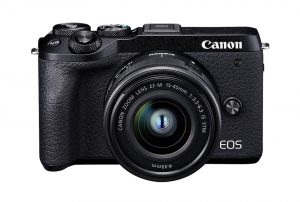 With Canon’s new EOS 90D and EOS M6 Mark II cameras, photographers can capture and share life’s most fleeting moments. Both models are equipped with Canon’s latest generation DIGIC 8 processor which achieves fast processing speed, responsiveness and the latest in photo and movie functionality. The lightning-quick electronic shutter speed of 1/16000 second is perfect for shooting momentary subject movements, giving photographers confidence in time-sensitive shooting scenarios. With this shutter speed the aperture can be opened even wider to create a greater depth of field even in ambient lighting.

Ideal for wildlife or sports photography, the EOS 90D shoots 10fps with autofocus tracking and 11fps in Live View. The optical viewfinder reduces lag time and enables the responsiveness needed to shoot wildlife, such as birds in flight, while an intelligent function gives complete visibility of the composition and shooting settings within the display. Where subjects are both quick and unpredictable, this fast frame rate and 58 L JPEG burst rate enables photographers to shoot continuously for a greater choice in imagery. EOS 90D also has an extended battery life with up to 1300 shots (CIPA standard) which allows enthusiasts to shoot all day, unencumbered by battery limitations.

The mirrorless model, EOS M6 Mark II, is capable of a 14fps continuous frame rate and staggering 30fps RAW burst both modes with autofocus tracking, producing a quick and compact model which guarantees enthusiasts can photograph even the unexpected. To give photographers the best chance of shooting spontaneous action, this latest mirrorless camera from Canon has UHS-II card support with a burst rate of 80 L JPEG. Additionally, focus bracketing in both models makes it easy to achieve an extended depth of field by combining multiple shots in DPP.

Delivering high quality, detailed images free from shake and artefacts, these new cameras leverage a new 32.5-megapixel APS-C CMOS sensor, which achieves full frame levels of resolution but with the additional benefit of reach provided by the APS-C format. Coupled with the DIGIC 8 processor, both newly launched models are enabled with the latest features from the EOS range which means photographers have greater reach, can crop further and take more detailed images than ever before. The processor also unlocks lens correction tools including the Digital Lens Optimiser and Diffraction Correction, which produce excellent images straight out of the camera. With incredible raw image quality and WiFi and Bluetooth capabilities, content creators can share images direct to social channels to create stunning, live content. For crisp, true to life photos which capture natural expressions and movements, Canon has incorporated a fast and accurate eye autofocus tracking solution in both cameras. In the EOS 90D, this works in collaboration with the 220,000-pixel RGB+IR metering sensor with Flicker Detection, for faithful face detection and greater control of overall exposure. This new sensor achieves greater resolution without compromising on low light performance, thanks to a high ISO of 100 – 25,600. Improving on the EOS M6, EOS M6 Mark II focuses at EV-5 when used with lenses with f/1.4 or larger aperture – to perform even in cloudy moonlit conditions, as well of course as within buildings or shade.

EOS 90D and EOS M6 Mark II are versatile cameras for stills and videos, capable of 4K resolution video utilising the full angle view of the lens attached and fast, Full HD up to 120 fps giving enthusiasts greater options for shooting, such as slow motion, cropped or super high resolution. 4K in cropped mode is also available from the EOS 90D, giving content creators the same great image quality, but with a further reach. This means operators can shoot high quality video even from a distance – a feature which provides enthusiasts the ability to capture stunning film in situations where they are unable to get up close to the action – like on safari.

A microphone port gives vloggers and content creators alike the ability to use an external microphone to achieve clear, undistorted sound, while the EOS 90D also has a headphone port so content creators can have greater control over sound quality in videos while filming. This produces a good feed when the action is further away and minimises the amount of editing required in post-production as enthusiasts can manage sound levels as they record. For filming on the go, the portable EOS M6 Mark II has a handy tilting screen which ensures even selfie-style content is perfectly framed.

The ergonomic design of these models supports seamless and familiar handling to provide enhanced control for any style of photography. As the latest DSLR to join the EOS range, EOS 90D has a familiar, yet lighter body with a large grip for better handling and balance, particularly when using long lenses ideal for shooting sports or wildlife photography. With two multi-function dials – including one newly incorporated multi-controller, as found in the professional range on the rear of the camera – and customary EOS buttons, photography enthusiasts looking to enhance their skills can shoot instinctively and confidently with greater focus point selection and access to useful settings at their fingertips The EOS 90D is equipped with a number of customisable features which can be set to give a consistent look and feel to both photos and videos. Its 7.7cm Vari-Angle touch screen provides greater visibility of image composition whether shooting in high brightness or at a challenging angle.

The compact size of EOS M6 Mark II enables a point and shoot style of photography needed to capture spontaneous moments on the go. A dial with function, main dial, customisable autofocus/manual focus selection switch and autofocus-start button are intuitively positioned for improved responsiveness in fast-paced shooting scenarios. The detachable viewfinder is raised and centrally aligned to create space and intuitive comfort for an immersive shooting experience, while the tilt-screen offers more creative capture and unrestricted video capabilities.

The Canon EOS 90D will be available from 12th September 2019 with the following RSPs:

The Canon EOS M6 Mark II will be available from 26th September 2019 with the following RSPs: