If you use a Speedlite on the EOS R or RP cameras, and use automatic exposure modes, P/Av/Fv then the camera controls fill-in flash differently to previous EOS cameras. The changes are probably designed to mean that photographers will get less shots with very slow shutter speeds when using flash. The flip side is that if you used to use Av mode, you’ll see it giving darker backgrounds behind your flash subject in low light situations.

Here’s the effect in pictures… 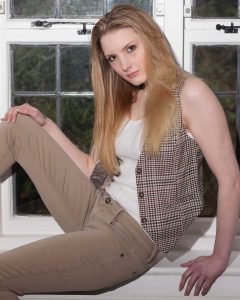 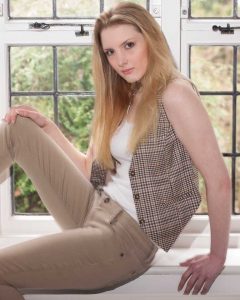 As you can see even the best models move at 1/5s shutter speed, check her left hand. Also look at how the space outside the window looks. The new method will make backgrounds darker due to the limited shutter speed, whereas the old way would aim to achieve a balance between flash and ambient light in aperture priority mode, even if camera shake was likely.

Here’s how the new method operates

I think the change has been done to avoid camera shake when taking casual flash photos.

The EOS R / RP both default to using a shutter speed from 1/60s to their sync speed when a flash is used and the camera is set to Av/P/Fv modes. Sync speed for the EOS R is 1/200s and EOS RP is 1/180s. If you are taking photos in daylight, and using flash for a little bit of fill-in you’ll see no difference on these cameras. However if you then move to a darker environment and keep working in the same way and are using Av or Fv with automatic shutter speed, then you’ll see that the backgrounds behind your flash subjects are much darker. To avoid camera shake due to the lower light, the limit of 1/60s applies and that stops the camera from nicely balancing the ambient and flash light. This is how program used work on previous cameras, and how it works on the EOS R series models.

However you can still use high speed sync if your flash supports it.

Make it work the old way…

Fortunately there is a setting in the camera flash menu to mostly change back to the old way of working. You can choose to set the slow synchro setting to 30s – sync speed. However this applies to P/Av/Fv modes equally. So you’d get aperture priority working the old way, but now program mode will also happily give you slow shutter speeds to achieve balanced fill-in flash.

Even better you can choose the 30s to sync speed option and still high speed sync will be usable if your flash has it, and the automatic shutter speed requires it.

The sync speed only ‘gotcha’

EOS R / RP cameras will also let you select the sync speed only option (1/200s / 1/180s), and if you choose this then you’ll stop being able to use high speed sync. Just like it used to. 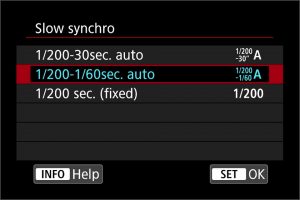 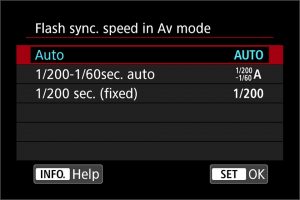 30s – sync speed is the default for Av with flash

1/60s – sync speed is the default for P with flash 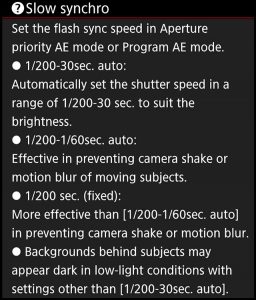 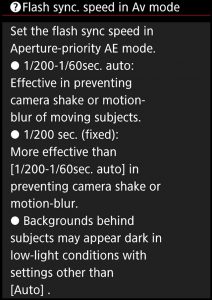 These don’t change since you are selecting the shutter speed, so it’s up to you. The settings you make for the flash synchro speed don’t limit high-speed sync or the shutter speed in these modes at all.

As you can see in the screenshot, Fv mode isn’t mentioned, so I did some tests because I like to know how stuff works.

I think this might be a good time to explore Fv mode. In bright light you can use Fv mode with a selected aperture and let the camera determine the shutter speed. So the camera works like Av and the shutter speed is not going below 1/60s. However if you  want a little slower shutter speed to let some more of the ambience show in a darker environment you can choose to select a suitable shutter speed – taking your own control. At that point you’ve broken free of the 1/60s limit, and could try handholding 1/30s or slower if needed.

I wrote a couple of articles about fill-in flash and high-speed sync before, they might make interesting reading 🙂

Did you disable high speed sync without realising it?