It’s been a busy few weeks with plenty of portraits at workshops and camera club talks. Today’s post is a few of the portrait photos that I’ve taken recently plus an explanation of the lighting for each one. 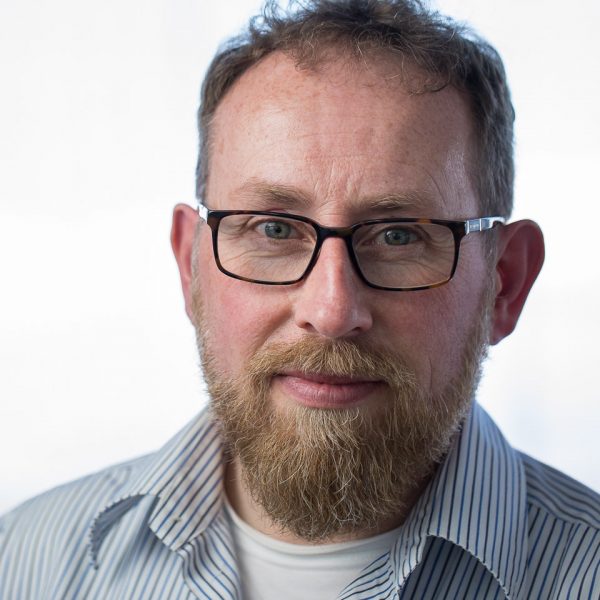 At the beginning of April I visited Iceland with my buddy Jonathan, partly to deliver a workshop for the local Canon distributor, Origo, and partly to shoot a whole lot of video for some training workshops in the future. The workshop with Origo concentrated on focussing and wifi with cameras like the EOS 5D Mark IV/III, EOS-1D X Mark II/I, EOS 7D Mark II, and then had a Speedlite session in the afternoon. I was fortunate that several of the folks from the audience were prepared to face the Speedlite, including Jonathan.

Lighting was a single Lastolite Ezybox Pro medium 60cm square softbox, with two Speedlite 600EX-RT flashes – set to E-TTL automatic flash. The background was the scene outside of the window of the space we were working in. Simply overexposed until it looked white, but not too far, then switch the flash on. I used the EF 100mm f/2.8L Macro IS USM lens. 1/50s f/3.5 ISO 1000. 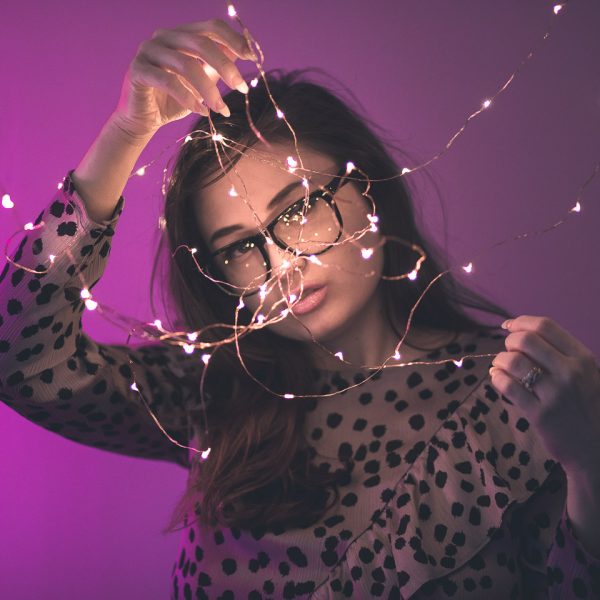 I worked with model Gabriella to shoot some “out of season” shots with a string of LED lights. However while the lights alone looked ok, there was something missing.

I added a purple gel to a Speedlite and put it in the Lastolite EzyBox Speed 2 Lite, then removed the front diffuser. This gave a nice spread of purple light on the neutral wall for a somewhat different look. Add some inexpensive glasses from an online auction site and voila. 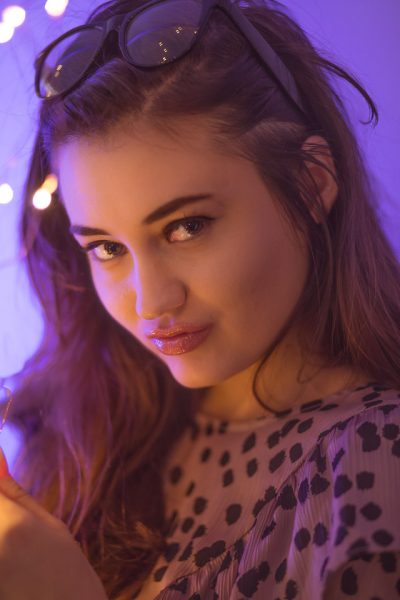 I used my EF 85mm f/1.8 USM lens at f/2 to give the limited depth of field. Shutter speed was set to minimise the ambient light, and the Speedite 430EX III-RT used as the background flash, was set to manual mode at 1/64 or 1/128 power.

At the end of April I visited Buckingham camera club to deliver a talk and live shoot with only one light. It was a good chance to do both Speedlite and studio flash shots, but only one light. All the pictures were taken with the same lens, the EF 85mm f/1.8 USM. 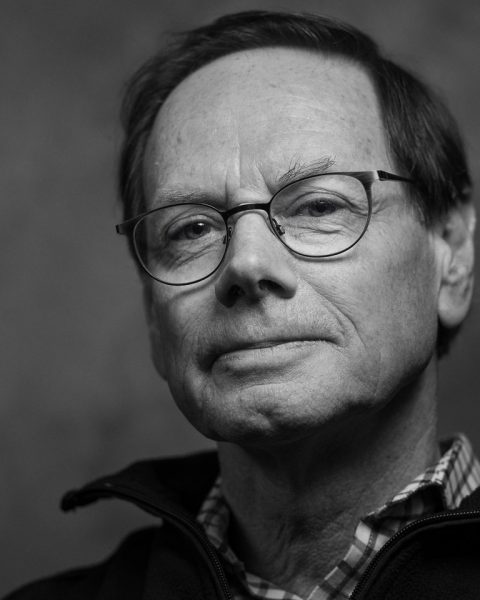 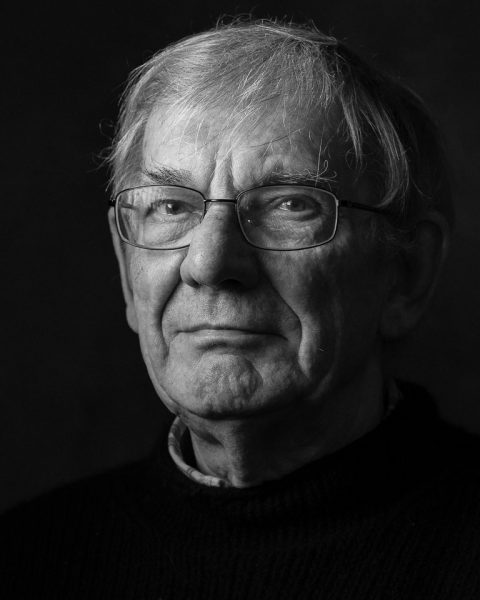 Next up was the single studio flash, fitted with the Lastolite Ezybox Pro Octa medium softbox & grid. The light was positioned to the left of the frame at almost 90 degrees to subject, keeping light off the background. The Ezybox Pro soft boxes can be fitted to studio flashes and Speedlites, to reduce the amount of kit I need. 1/200s f/8 ISO 400. 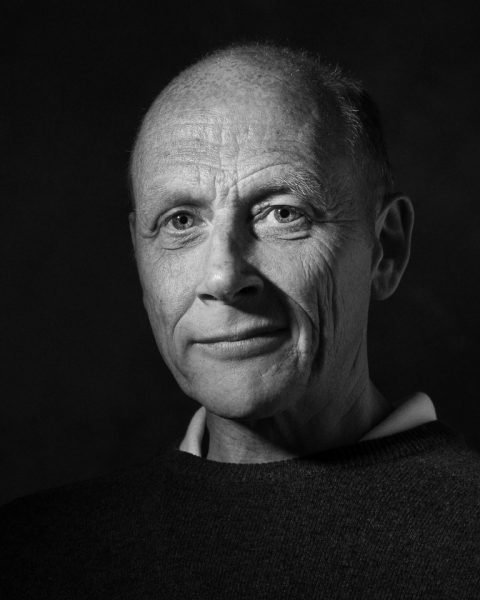 One brave “volunteer” stood up for the hard light shots. Studio flash with a small reflector and grid created hard shadows, great for masculine faces. I also used a reflector on the right of the frame, just out of shot for some fill – still only one light though. 1/220s f/11 ISO 400.

So much fun to be working with Georgia and Canon again. Speedlite flash setup to show a variety of looks, that can be switched easily. 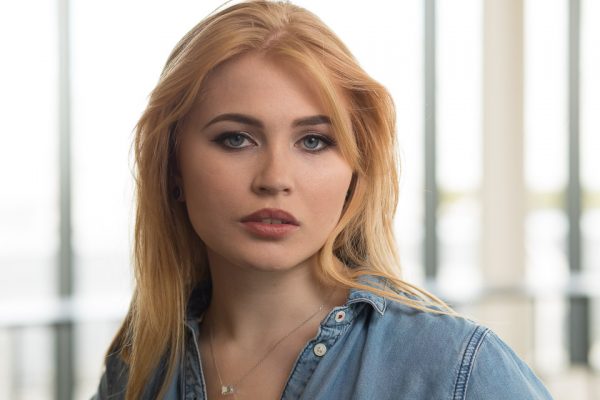 For this shot, above I simply asked Georgia to move off the setup background we were using, and switched on the group of flashes in the Lastolite Ezybox Pro Octa. I changed my camera settings to let the ambient – grey skies of Birmingham – become my background. E-TTL automatic flash. 1/200s f/4 ISO 400. EF 85mm f/1.8 USM lens. 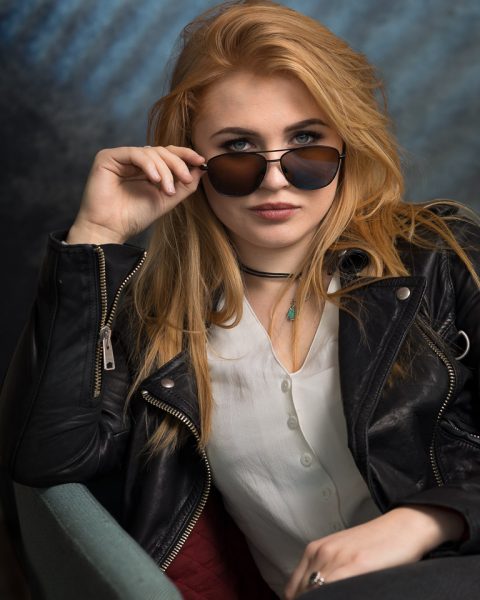 For this shot of Georgia, it was time to use more than one light. Main light on Georgia is the Lastolite Ezybox Pro Octa medium. It’s placed above Georgia and slightly to the right of the frame. The background is one of the pop-up concrete textured ones, but I’ve added light from another Speedlite on to it for a variation in the look. I used the Lastolite Strobo Gobo with a gob having a series of slits. Then I added a strobo gel on the front to add the blue colour. Main light is set to E-TTL automatic flash, background is set to manual mode. 1/200s f/5 ISO 200.

After what seemed to be a week of charging batteries for flashes I finished with a beginners Speedlite workshop for EOS Training Academy. Millie was my chosen model for the workshop, it was also her first time modelling for one of my workshops, though we’d shot some time earlier. 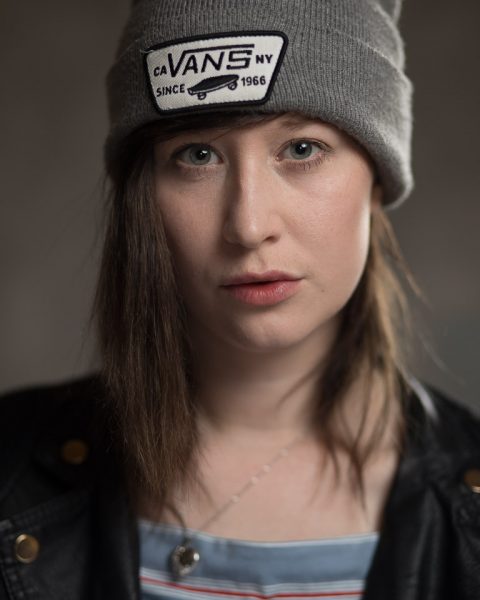 For a beginners Speedlite workshop, I make sure the attendees are getting comfortable with on-camera, bounce and one light off-camera. Usually, like this time, I have both radio and optically triggered flashes in the same modifiers. This one of the workshop setups, I just opened the aperture on my EF 85mm f/1.8 ISM lens a little, and stepped a little closer. E-TTL automatic flash form the Lastolite Ezybox Pro Octa medium. 1/200s f/2.2 ISO 400 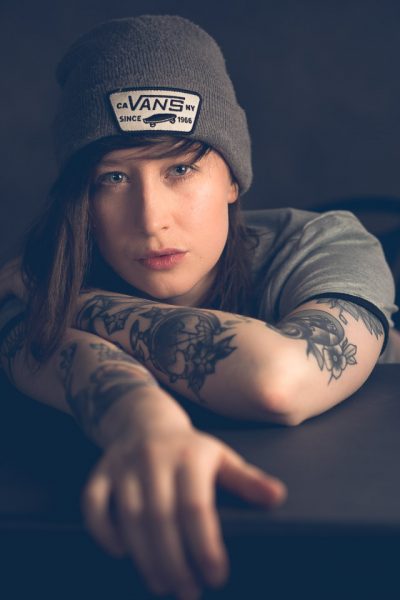 At the end of the workshop, Millie asked if we could do a couple more pictures. Yes indeed we could. First up was a favourite workshop setup – shopping bag lighting – which just looked great with Millie’s tattoos. I used the Lastolite Ezybox Speedlite 38cm x 38cm right on the table level and asked Millie to reach across it. Still using E-TTL automatic flash and the EF 85mm f/1.8 USM lens too. 1/200s f/4 ISO 400. 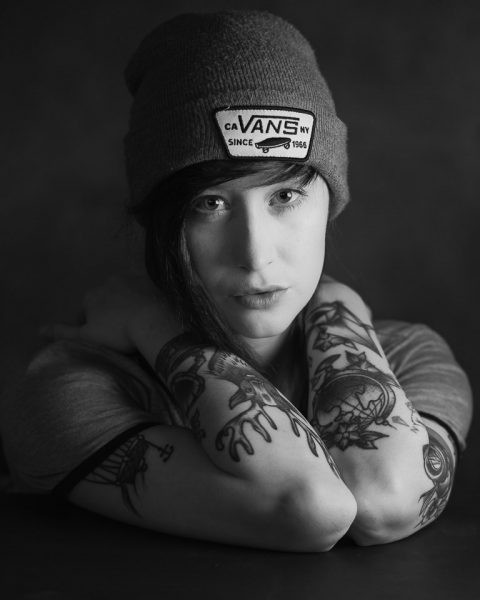 This last one was shot in colour, but when I tried a quick black and white conversion I looked the look. It’s probably the most “edited” picture in the post as there’s been some additional darkening of the frame, lightening of Millie’s face and some grain added. It was still automatic flash though. 1/200s f/4 ISO 400.

I’d say that pretty much sums up my work for April and the beginning of May. There’s been workshops, camera club talks and photoshoots. Remember I do take bookings for 1-2-1 training on a range of topics, and camera club talks so please get in touch.

All of these shots, except the ones of Gabriella, were taken with my camera tethered using WiFi to EOS Utility. This means they appeared on the laptop screen right after the picture was taken.  I’m glad that hardly ever need to use a cable for tethering these days, much less chances of a trip or broken gear during a demonstration or workshop.

I think I’ve still got a special love for my old EF 85mm f/1.8 USM, it’s small light, and delivers the goods. If I have to have a camera on my shoulder or in my hand for a long period of time, it is a favoured choice indeed. Maybe it’s time I have two 85mm lenses in my collection; f/1.4 AND f/1.8 🙂