At this years Scott Kelby Worldwide Photo Walk I ran a competition for the people who joined my walk. It was a series of questions about things that they might see on the way round the walk. The prize was a 1/2-day 1-2-1 training session with me. Joy Rawlins won the prize on the day.

When I pulled Joy’s entry from the hat, she told me that she shot with a Nikon camera, so she wasn’t sure if someone else might be better suited to the prize. In my mind she had won, and i’d just modify my teaching to working with her camera. Over a few emails we hatched a plan for a return to Oxford for some location portraits, mixed with some street photography.

For the portraits, I selected the Yongnuo YN-E3-RT transmitter for Joy to use. It has legacy mode triggering, that works on on all kinds of cameras, to trigger Canon RT series flashes in manual mode. Packing a small Manfrotto nano stand, the EzyBox Speed Lite 2 I headed in to Oxford to meet up with Joy and our model AmberJoy, for what turned out to be a ‘joyous’ day of photography 🙂 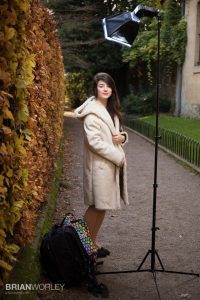 We started out in a small lane between just off  Merton Street and next to Merton College.

The small EzyBox works really well, if you can get it close to the subject.

Remember it is the relative size of the light, that is important for softer light.

First steps were to consider the ambient light level and set the camera exposure manually for it. Then the flash is switched on and the power adjusted to give a suitable exposure on the model’s face. 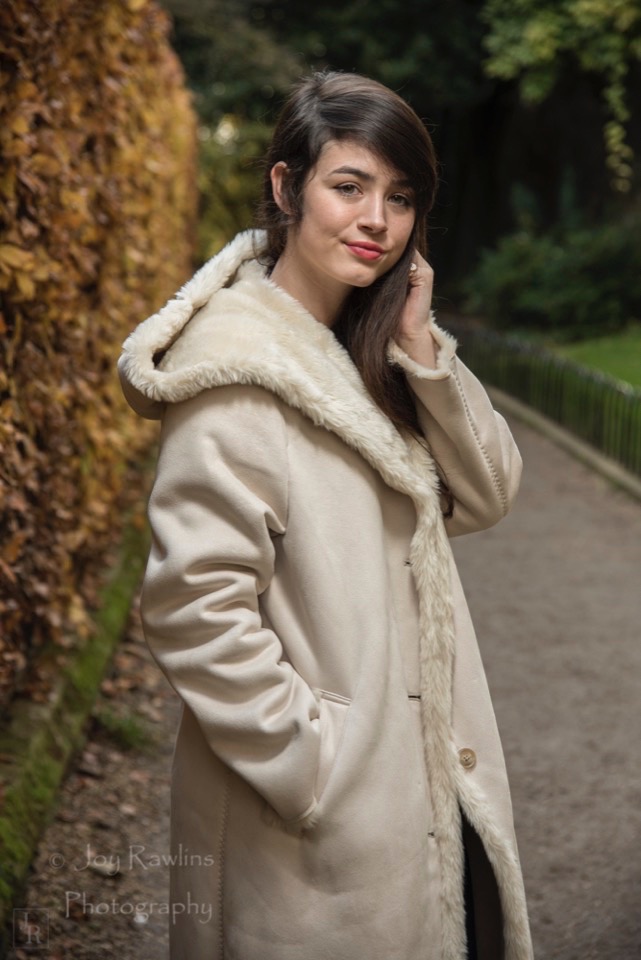 Just by moving the light around Amber, there were a few different looks available, and we worked with combining the ambient light and flash. Flash was set to manual mode, but once you get the setting right it’s pretty simple to ensure the light is kept at the same distance from the subject – and hence, keep the same exposure. 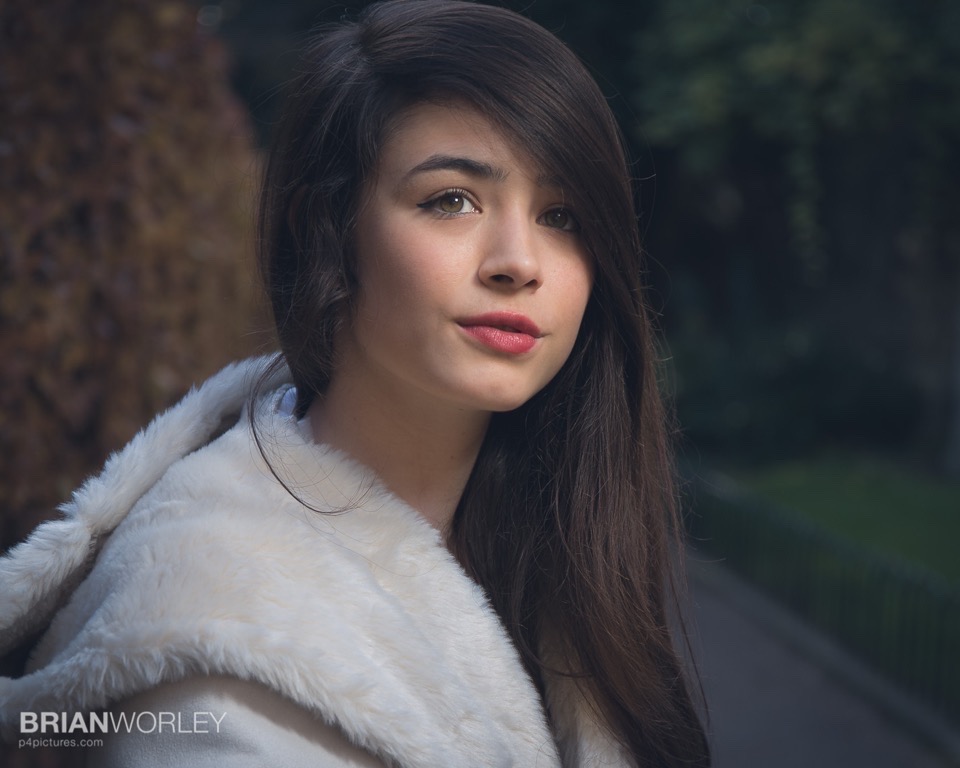 My shot has a little bit of a lift to the tone curve to raise the blacks, but shows the kind of variation we achieved in this first location.

At the end of the lane, there’s a gate and it was out in to the chilly, but bright sunshine. We started with some backlit looks, using the sun as a backlight and the little EzyBox as the main light. It was soon noticeable that Joy was running in to some darkening on one side of the frame. After a bit of thought we found that the sync speed was not limited with the transmitter, and we were seeing the shutter curtain covering part of the flash exposure for shutter speeds faster than 1/125s. You can see that on the left in the picture below. 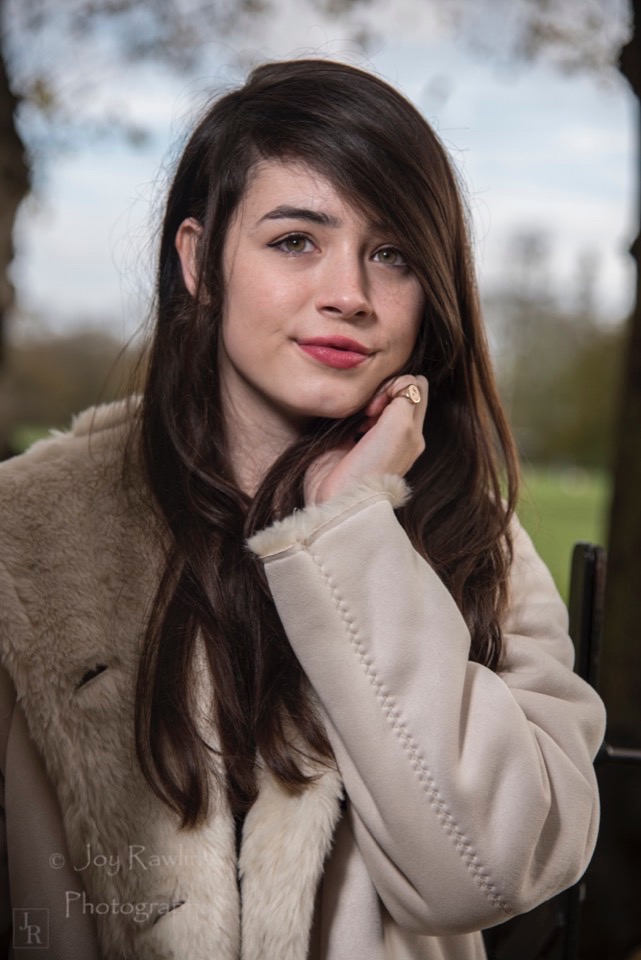 Then we changed the location of Amber, removed the softbox and zoomed the Speedlite to 200mm. This gives a narrow beam of light that we could use to light Amber against the wall, here it becomes more important to balance the ambient and flash light, so that the harshness of a distant small light source is reduced. 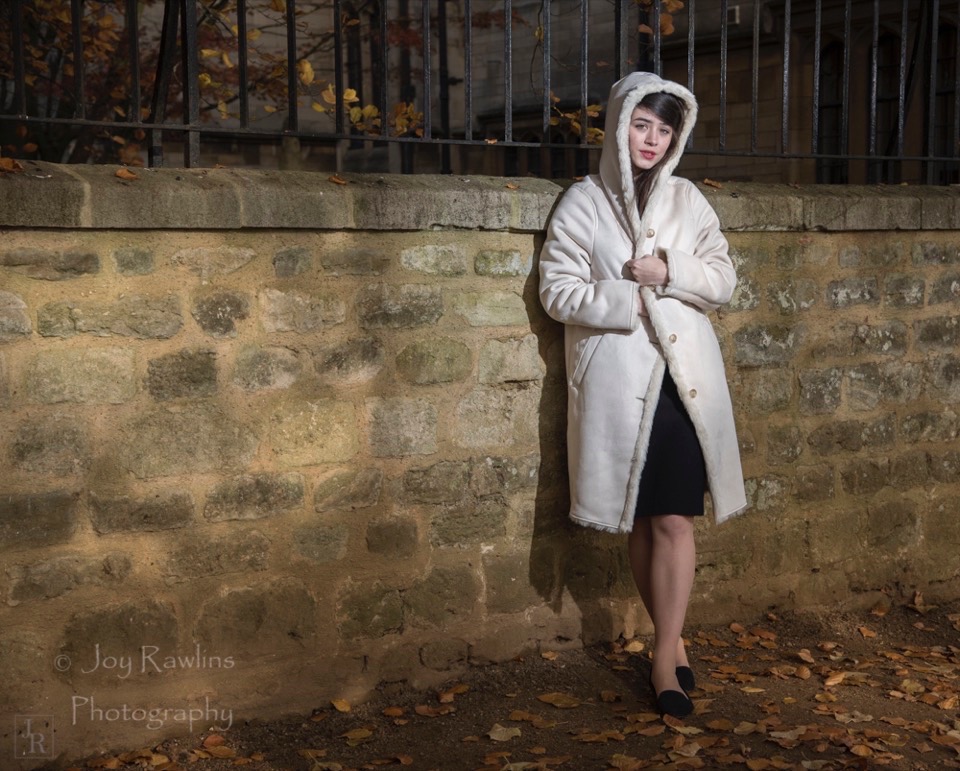 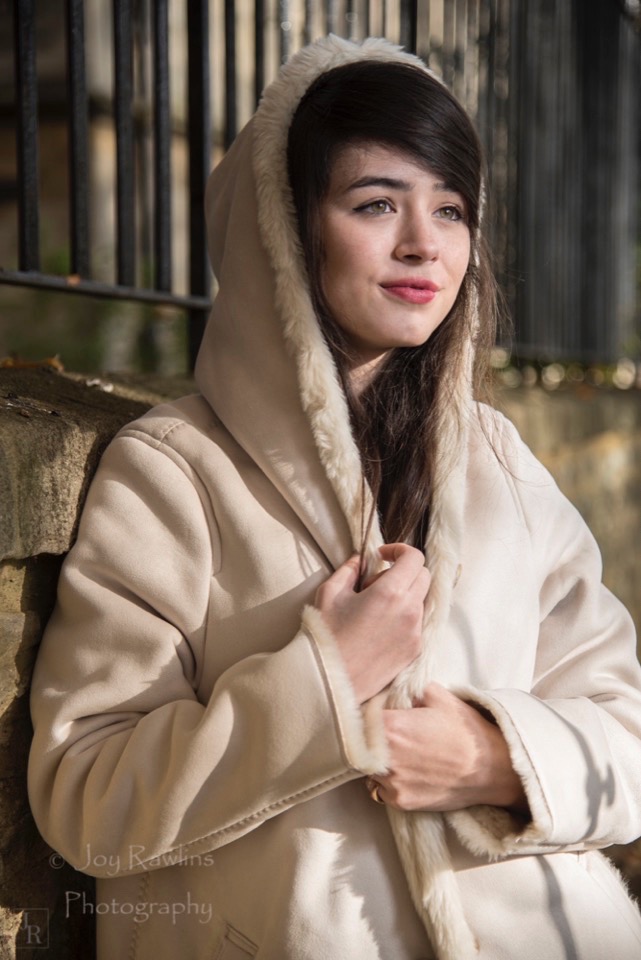 Bringing the light closer, and adding the small softbox was also helpful. 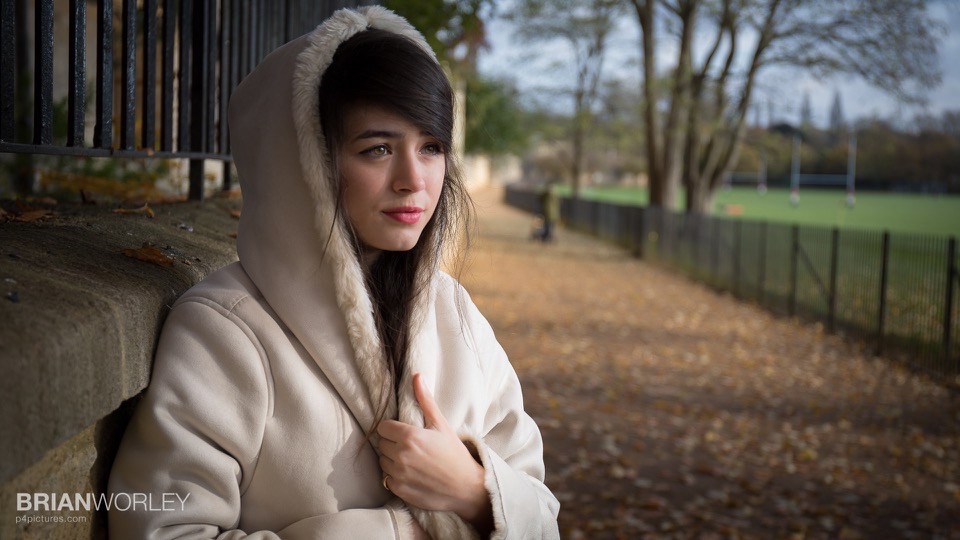 I also shifted the white balance on my camera to warm the photo up, giving a more autumnal feel. Cloudy or shade white balance are worth trying in such cases. 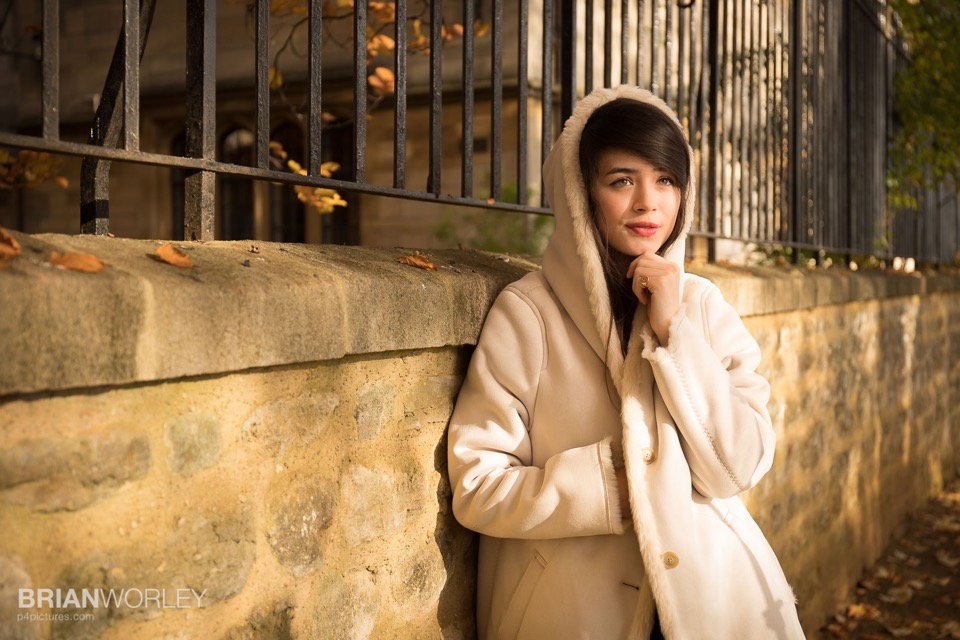 We then moved back to Merton Street, and to speed things up, I simply held the flash and softbox to light Amber. 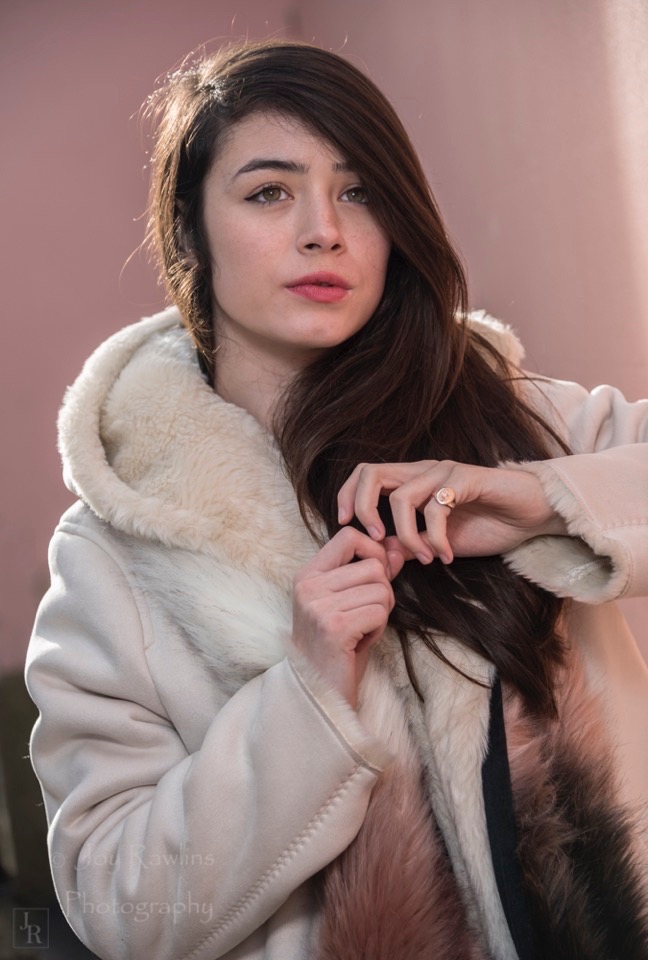 We had a great fun few hours making photos with Amber, and then it was time for lunch. After lunch we headed back to the streets of Oxford to try out some street photos, and panning pictures. I had selected the 40mm f/2.8 STM pancake lens as I know the field of view it gives me. I also shot in monochrome mode, as the light had become flatter and less interesting. 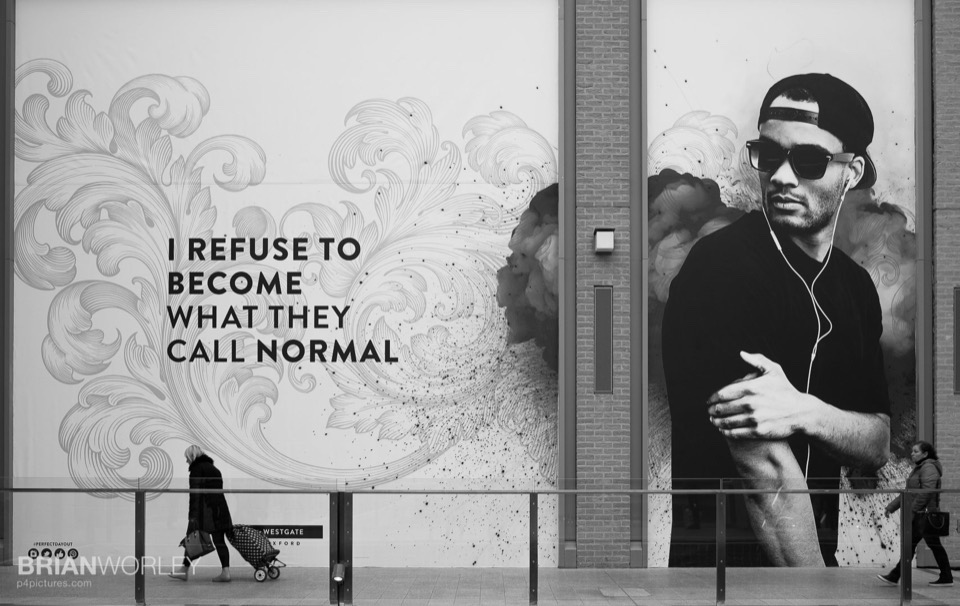 What Joy wrote about the training…

It’s the first time I’ve had the opportunity work with a model outdoors, and the results are great that you can get with a fairly simple lighting set up.  Not only the portraiture training, but the panning lesson was very useful.

I really feel I understand the principles of simple single flash photography for portraiture now. It was probably the most useful training for me as I’ve enjoyed window light portraiture, often black and white, for years but it’s the flash technicalities I’ve shied away from.

It was great to spend the time with Joy, and Amber, in Oxford. I had an enjoyable time talking photography and guiding Joy to try out new ways of working and techniques.