Tuesday evening this week I headed out to give a talk about flash photography to the members my local camera club, ImageZ in Weston Turville near Aylesbury.

In the first half of the session I gave a short presentation about light and flash lighting. Then after a break for tea, I tethered the camera to the computer and lit up some of the members and the club chairman. Shooting tethered like this ensures that everyone can see instantly the effects of the lighting and settings on the big screen.

First step was to show that with flash photos you need to consider how the existing light in the environment is going to be captured before you add any flash. 1/200s f/8 and ISO 100 made mincemeat of the low ambient giving purely black frames. All the pictures with these camera settings would be purely the result of the flash. 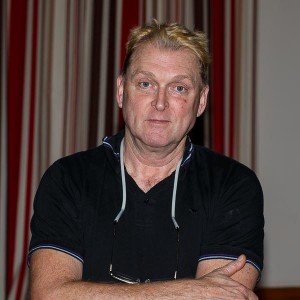 On-camera flash for the chairman…

Bravely the first to face the flash was the chairman; I say bravely since he was going to be lit with on-camera flash as an example of why it’s better to get the flash off-camera.

Then with the members understanding that on-camera flash aimed straight at the subject is not an ideal approach I moved to off-camera flash with a single un-modified flash. The result was a little less flat but still quite harsh.

Time to add in some modifiers… 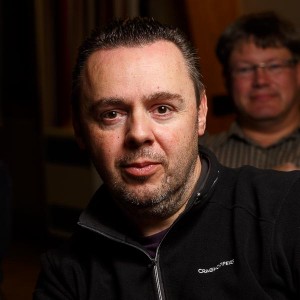 White shoot through umbrella close in

The inexpensive white shoot-thru umbrella gives a wide spread of light, even lighting people sat in the rows behind my subject. 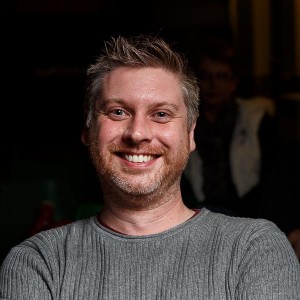 Switching to the silver reflective umbrella and the light is similar but better constrained. The folks in the background are much less defined. 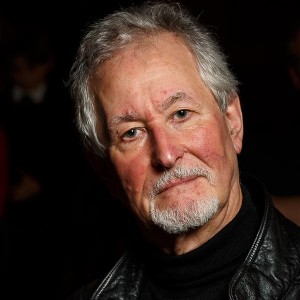 Finally choosing he Lastolite soft box the control of the light is simplified, yet it has a smoothness and wrapping as it’s really close in to the frame.

What kit do you use for off-camera flash?

As is often the case with these camera club talks I get a number of questions about light stands, mounting brackets and modifiers. Take a look at my off-camera flash lighting kit for  details about what I use.

If you would like me to talk at your club then I’m open for bookings in 2016, even beyond if you plan that far ahead. Also I may be able to fill-in for you if another speaker lets you down. Head over to the camera club talks page for more info.