EOS M2 launches in Japan – only! 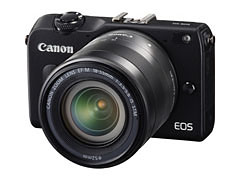 Ever since the EOS M2 name appeared in PDF instruction books earlier in the year the name has been known, but today Canon has done something odd with the EOS M2, they’ve launched it in Japan, but not Europe or the USA.

So far details are sketchy if you don’t read Japanese, but the new camera is a little smaller, has built-in WiFi and uses a Hybrid CMOS AF II sensor. The sensor – according to CameraLabs – appears to be the same as the one fitted to the EOS 100D, not the really very good dual pixel AF system as found in the recent and excellent EOS 70D.

For the Japanese market shipments are expected to start from mid-December and there are several configurations of kits. 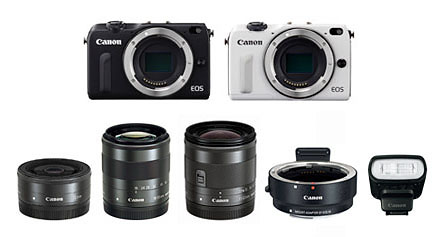 It seems that Canon is not convinced about mirror less cameras in Europe and the USA. First the EF-M 11-22mm f/4-5.6 IS STM wasn’t ever launched in the USA, now the updated body is a bit smaller and has WiFi but is not launched in the USA or Europe, pretty odd.

I have checked the Camera and Imaging Products Association (CIPA) website; where they have shipment information for Japanese camera makers, but not Samsung. It shows significant difference between the Japanese market and Europe. In Japan for the period from January 2013 to October 36.6% of cameras with interchangeable lens shipments where non-reflex cameras. Over the same period Europe was 11.2% and the USA 9.5%. Though recent single month data in Europe shows significant increases in non-reflex (mirror-less) cameras compared to DSLR.

Is the tide turning and have Canon missed the boat with mirrorless camera systems?