I have recently been working with a range reflectors and diffusers for outdoor photography, and one of the problems is maintaining the placement of the reflectors – particularly if you’re working single handed. Here’s where the Lastolite TriGrip Bracket comes in handy. Holding the reflector in one hand and the camera in the other gives less consistent results from one shot to the next.

I’ve come to like using the Lastolite TriGrip reflectors,  the 75cm ones are a great size for many purposes. Add the Lastolite TriGrip Bracket and you have a solution that keeps the reflector in place shot after shot. I use it on a lightweight Manfrotto 5001B nano stand, and if necessary add my camera bag as a weight on the legs of the stand.

I’m in two minds about the double ball joint between the stand and the TriGrip bracket itself. It does provide really a lot of movement and flexibility of positioning, but it’s quite long and heavy. Fortunately it can be switched out for something smaller, lighter, less flexible such as the Manfrotto 026 bracket.

Being the clever folks that they are, Lastolite engineered their TriGrip bracket to not only hold the reflector but also a Speedlite and there’s even a hole and locking screw for an umbrella if you need. You could bounce the flash off the TriGrip surface and then through a shoot through umbrella if you needed to. 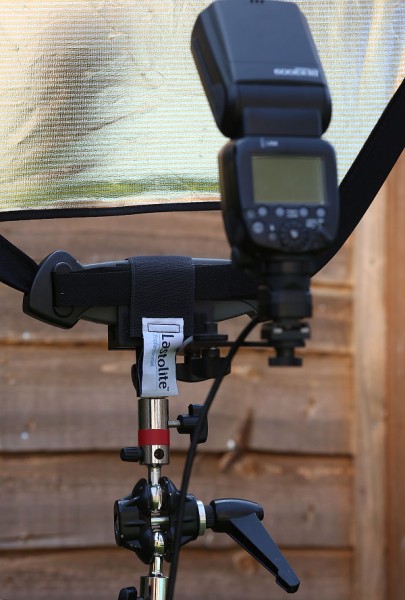 The observant amongst you will notice that this Speedlite is not radio controlled, but on a hot-shoe with a cable. I was working out the best zoom setting for the Speedlite 60EX-RT to really light the face of the TriGrip and the long OCF-33 cable from OCFGEAR gives me full control of the Speedlite zoom from the camera LCD. Setting the zoom to 24mm is sufficient to give a good coverage to the surface of the 75cm TriGrip with the Speedlite 600EX-RT. 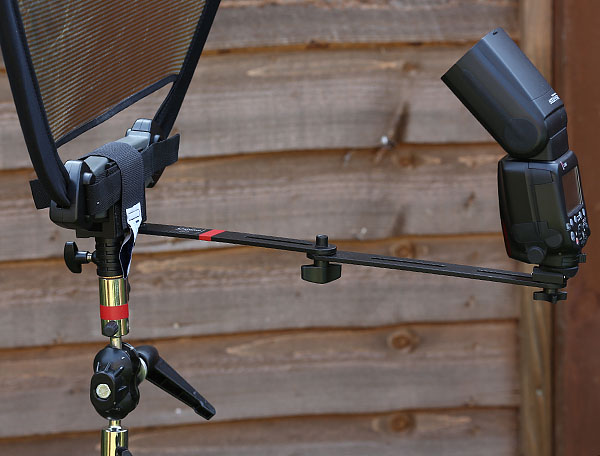 Now I know how much zoom will fill the TriGrip I use the flash in the regular radio mode with the zoom preset to 24mm. I’ve found that the Sunlite surface of the TriGrip is great for a warmed up look, and is more powerful than using a warm up gel on the flash and the silver surface – but there’s not much in it.
Top

You can buy Lastolite TriGrip bracket, reflectors and the Manfrotto stands from Amazon.

One Response to Lastolite TriGrip Bracket a helping hand for photographers