Big birds in the back garden

Living in the Chilterns on the border of Oxfordshire and Buckinghamshire red kites are birds we see almost every day. Impressive masters of flight they soar around the skies and their piercing screech is a common sound. This weekend me and the kids decided we’d try something different – back garden pictures of the red kites with a remote camera and wide-angle lens.

Wide, but not too wide

Initially we tried a 14mm lens, but it showed way too much of the garden – and the multitude of kids toys that seem to reside in the garden. So I elected to try a 24mm lens, the good old faithful EF 24mm f/1.4L USM (the Mk I version). Prefocus would be the order of the day and apertures in the range of f/8 or f/11. The anticipated landing point of the birds was around one metre from the camera.

Also with the kids trampoline acting as a bit of a restriction to the flight path of the birds I placed the camera low to the grass. I inverted the centre column of the old faithful Manfrotto 055 and then added the 131 DD to let me mount the camera out in the grass out from the centre and so eliminating the tripod legs from the frame. The legs of the tripod were splayed out as wide as they would go to get the camera as low as possible. 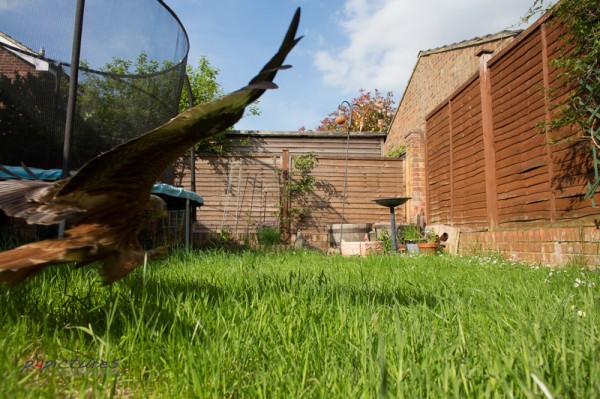 I had hoped the birds would come towards the camera and out past it, however one or two had other ideas, and thought that coming in to the scene from behind the camera and exiting over the fence and the neighbour’s shed was a better plan as you can see below. 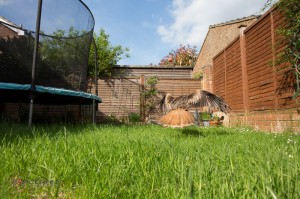 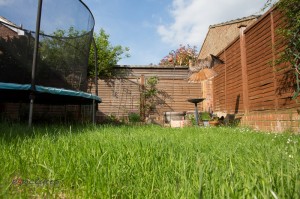 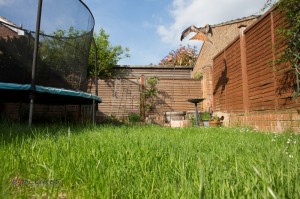 Look at the size of the shadow on the fence panel – that panel is six foot tall! These are big birds and it’s a pretty small space for them to drop in to.

First shot and a bit of luck 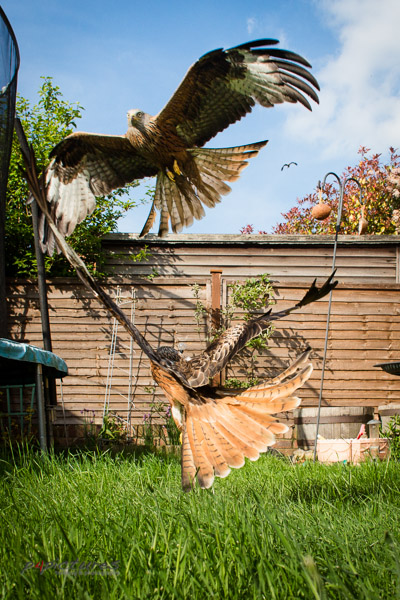 This is actually the first shot of the session – typically. Right after the chicken went out and I retreated in to the house with the remote release there were a lot of shadows of big birds over the garden. In the initial wave several birds tried to feed at the same time from different directions. The lower bird in this frame has flown in over the top of the camera position, and the one above has come in toward the camera at the same time. They will have to sort out the air traffic control 🙂

If you look in the blue sky there is another red kite on it’s way in to feed too. In another shot not shown here there are three red kites on their way in to feed. It’s kind of like a Chilterns version of the stacked aeroplanes you can see at Heathrow during busy times.

And then the sun moved and it went darker

The camera was set to aperture priority for all the shots and with the sun on the grass shutter speeds were just about fast enough 1/1600s with ISO 800. However as the sun moved and the light level dropped the camera shutter speed dropped too – these birds are fast and so for the rest I saw plenty of sharp garden and blurred birds. I went from pictures like this – at the limit of acceptable sharpness… 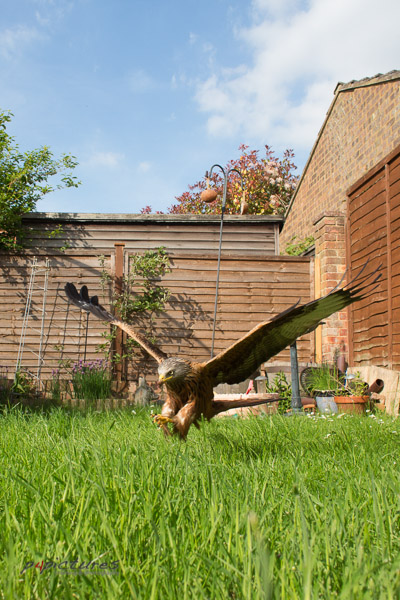 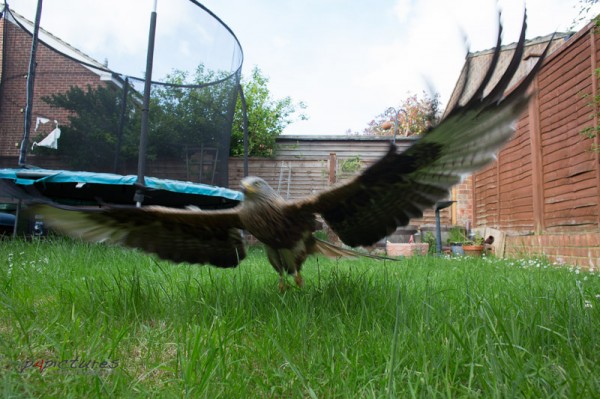 It does neatly show that the 24mm focal length was spot on for the wingspan but 1/250s was just not fast enough.

I think that there’s plenty more to experiment with, firstly somewhere with a better background, and then maybe some flash – most likely high speed sync to let me run the camera shutter fast enough too. One thing that i’ll try next time is using manual mode for the exposure to give me the depth of field and shutter speed I need, then let auto ISO do its thing!

To make these pictures I used a simple set of gear, and it’s something that could have been shot with just about any DSLR and a standard kit lens in reality.