Lastolite seminars at Focus on Imaging

I’m known for doing a lot of Canon seminars and quite a lot with Speedlite flash, so it was really great to be asked by Lastolite to deliver a few demonstrations on their stand at Focus to show how their softboxes, grids and gels work with Speedlites.

Lastolite’s latest EzyBox II softboxes have a system that allows the light mounting to be changed independent of the soft box, so you can use the same softbox with studio lights, the Elinchrom Ranger Quadra or as I did Speedlites.

EzyBox II Octa with two Speedlites as the key light

Each day started simply with the large EzyBox II Octa, often with the Speedlites set to E-TTL (yes automatic flash). Just moving the EzyBox around from mostly front on to a more side on position gave a range of pictures, and the first session I used the metal side of the urban background. The picture below is one from the first show with just the EzyBox II Octa. For the second session I worked with Kat and elected to swap the urban metal background for the corrugated iron effect one that is actually just on the other side. I soon found that the range of near mid-grey colours in the background really took colours from a gelled flash very effectively, making the background even more versatile. As you can see in the right hand picture above the red gel adds warmth & colour to the background, plus I added a strobo grid to another Speedlite to the camera right for hair light.

On day three and four I again worked with Siobhan. Switching the gels over is simple with the Strobo gels they attach magnetically to the mounting bracket so no pulling at velcro and the fit is instant and secure. You can click a thumbnail for a larger view of these three images. 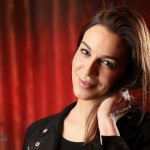 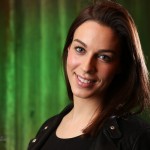 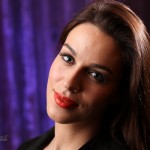 In the last session I used the Strobo Gobo combined with gels to create shapes and textures on the background. In fact I started with the urban background, but soon switched to the plain wall of the booth, and then to give a better surface to work with, a mid-grey Lastolite pop-up background . This first picture uses one of the window shaped gobos and I probably had the flash head zoomed a bit to tight creating the hot spot, though if you need a moonlight effect it’s good too.This is the wall of the Lastolite booth as a background. Switching to the mid-grey background gave a less reflective surface and one that took the colours pretty well too. The photo above uses one of the optional Natural gobos and a green gel for the background.

Turn up the ISO

Since I wasn’t 100% sure how much power I would need from the Speedlites I set the camera for ISO 400 for my demonstrations. This makes the flash two stops more powerful meaning I can use less power and get fast recycle times – great for demonstrations, and ISO 400 still delivers very clean images.

Gary Astill from Lastolite commented that my pictures all seemed to have a very sharp quality to them, I’m pretty sure that this is down to the fact that when you use a Speedlite at low power then the flash duration is very short, and these pictures are almost exclusively lit with flash.

I used the following items during the demonstrations for Lastolite

It’s also possible to get the components from the Strobo Direct to Flashgun kit separately. This makes it quite cost effective to get a couple of grids and say two of the mounting kits for Speedlites. I was happy to see the grids are actually metal (definitely felt metal to the touch), so they will be pretty durable.

The linked product list here will take you to Amazon, I get a few percent if you buy from them, it all helps keep this site running.

To keep things simple the images in this post have just been resized for the post, this way you can see the lighting as it was created live in a demonstration setting.