Following on from all the great fun I had shooting the kickboxing pictures back in June I was asked to shoot again for Pegasus Kickboxing’s latest Storm event that was on Saturday. The venue was the Aylesbury Waterside theatre so I thought that the lighting might be brighter and therefore make the task a little easier.

Prints from these fights available to buy online

Here’s a small selection of the pictures from the fights, you can see more and get prints from your favourites in my Gallery http://gallery.p4pictures.com 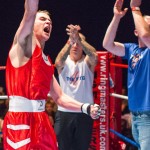 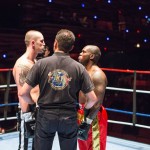 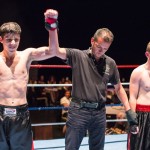 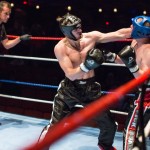 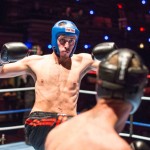 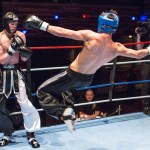 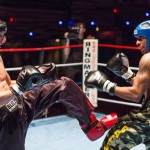 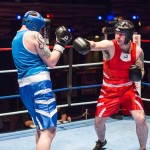 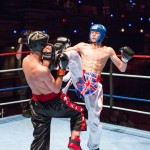 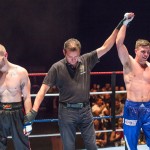 I soon found that the ISO was pushed to 6400 to keep shutter speeds fast enough to capture the action in the ring – those fighters move fast. I was working from one of the neutral corners of the ring with a video guy shooting from the other corner. Also the theatre lighting team had put plenty of light straight down on to the ring, but if a fighter was on the ropes getting a beating then the edge of the light was falling off fast. What’s more, the audience out in the theatre were in the dark, this meant the camera seeing a lot of black in the background and this influenced the camera’s metering to over expose the pictures of fighters in the ring. Using aperture priority I dialed in -2/3 of a stop exposure compensation and set the camera for tungsten white balance. I used the EOS 5D Mark III

it did an amazing job yet again. The AF was set exactly as I had done for the last kickboxing event. Most of my pictures were shot at f/2.5 or f/2.8 to give me shutter speeds from 1/250s to 1/400s. Check out my Awesome Focus (AF) on the EOS 5D Mark III post for details how I set up the AF. I did experiment with using the camera custom controls to assign a different AF Case (6) to the depth of field preview button but found I rarely used it in the heat of the battles!

If you want to see more of the pictures then there is an album of over 100 pictures from the Kickboxing and updates are also posted on my Facebook page which while you are there it would be great if you can like Brian Worley – p4pictures.

I’ve had some feedback from several of the fighters and the folks involved in the event and hope to do even more of these events. Though I also know that a SUN-SNIPER “Pro” Steel & Bear

is in my future.

As an extra bonus a number of my pictures from the selection above also made it in to a full-page feature on the event in the local Bucks Herald newspaper.