More than a flash in the pan – Speedlite 600EX RT

My new Speedlite 600EX-RTs and ST-E3-RT arrived just over twenty four hours ago, rather fortuitous as I need to be demonstrating them at some upcoming events soon.

First impressions, the radio is easy to set-up, I didn’t need to read the manual and was able to get the two 600EX’s to talk to the ST-E3. I love the Group mode that becomes available when you use the flashes on the latest EOS 5D Mark III and EOS-1D X cameras – I would say that after radio triggering this is one of the most beneficial elements of the update for me. Group mode gives the ability to shoot with one group of slaves as E-TTL another as manual or even external metered (some might say thyristor) mode. In the 600EX-RT self portrait below, I’ve set it to be manual mode with 1/128 power from the ST-E3. This flash is working while having it’s picture taken! Then I have another 600EX-RT in E-TTL II mode slightly off the axis of the camera to the right side with it’s head zoomed in to 200mm to only illuminate the back of the flash. 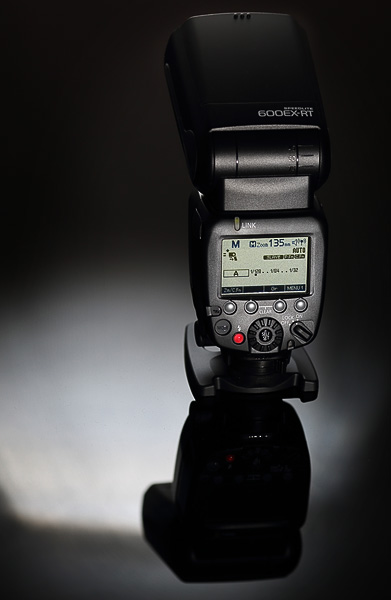 Picture taken with no modifiers at all, just using the zoom on the flash heads. Flash is on black acrylic (perspex) sheet and there’s a big 120cm x 80cm white diffuser overhead at an angle to allow the pictured flash to create the white spot on the black acrylic in front of the flash unit.