At the Focus on Imaging show yesterday I got a chance to have a quick look at the Canon EF 200-400mm f/4L IS USM Extender 1.4x lens (bit of a mouthful of a name). 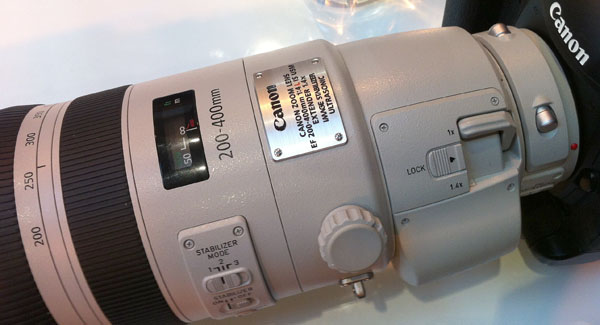 To be honest I expected it to be much heavier than it turned out to be, and also much larger. Hard to give details, and since this is one of only a handful of these lenses in existence right now anywhere in the world there was no chance to put a card in the EOS-1D Mark IV it was attached to. However focus seemed really snappy and the lens looks sharp from the rear LCD display. Switching in the extender is a case of simply slide the lock back and move the lever to put the converter in the optical path. Then slide the lock back to prevent the converter moving out of place.

In common with other recent lens releases the new one looks to be priced at the “small car” level – no one at Canon would be drawn on detailed pricing and a range of between £8,000 and £15,000 was suggested – ouch.

For me it’s back to Focus for day three of four and some more seminars on the Canon booth. I’ll be doing Speedlite flash at midday and then the Canon software at 15:00 and the same again on Wednesday.