Warning: call_user_func_array() expects parameter 1 to be a valid callback, function 'theme_section_favicon' not found or invalid function name in /home/p4pictur/public_html/wp-content/themes/champion/framework/functions/common.php on line 61
 Choosing a lens for car racing at Brands Hatch

Which lens did I choose for the British Touring Cars?

I cheated and took two lenses 😉

What a great day it turned out to be for the British Touring Car race meeting at Brands Hatch. After some thinking my lens choice for the races turned out to be both of the options so on Sunday my bag had the EF 100-400mm f/4.5-5.6L IS USM and the EF 70-200mm f/2.8L IS II USM with an EF 1.4x Extender II finding space too.

Arriving early at the circuit I elected to start the day shooting from inside the approach to the tight Druids Bend, here there’s very low single strand wire fences and you are really close to the cars. A circuit map can be found on the Brands Hatch website. 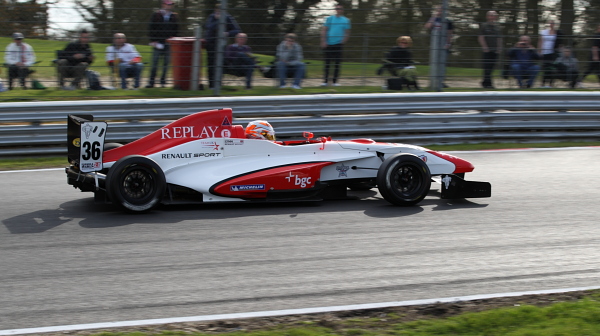 Right from the first picture of the day, I had a feeling that it was going to be a day of many pictures and so it turned out with the the CF cards containing 1800, yes eighteen hundred pictures by the end of the day. The Formula Renault car pictured turned out to be one that I couldn’t fail to capture well and also won the race, but this is my first shot of the day and was taken with the 70-200 lens at 70mm. There’s little room for error and 100mm would have made it much harder to give some space around the car. Checking the LCD I could see that shooting in to the sun put the closest side of the car in to shadow, so I moved to shoot some more pictures from the exit side of Druids Bend. With motorsports and circuit racing specifically I usually use manual exposure mode and the track tends to make a fine grey card for measuring the exposure from.

After the first race I moved anti-clockwise round the circuit to a point looking across at the track as it drops down from Paddock Hill Bend. Here the elevated position and sloping hill as the track and cars climb up Hailwood Hill gives a very different perspective. Right from the start of the Ginetta Junior race I tried with the 70-200mm and 1.4x extender, but in a few laps switched to the extra reach of the 100-400mm lens. It was a bright day and I could get shutter speeds over 1/1000s and keep f/8 aperture with ISO 400. 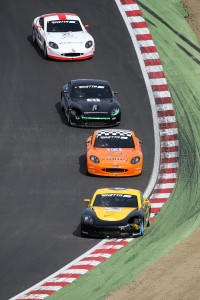 The two shots above show the difference of shooting with the 280mm and the 400mm lens options. The longer length cuts out the top of the catch fence and gives a tighter crop. Also with the tighter crop the depth of field covers all the cars in the shot.

With the taste for the longer lens, and it almost locked at 400mm I shot the first of the British Touring Car races from the same position as the Ginetta Junior race. The sun was also moving round. Jason Plato’s blue Chevrolet contrasted really nicely against the red, white and green of the track boundary. Since I was shooting in a portrait orientation to maximise the leading line of the track edge I moved the AF point away from the centre one. Far too often photographers stick with the centre point for AF regardless of where in the frame the subject is. 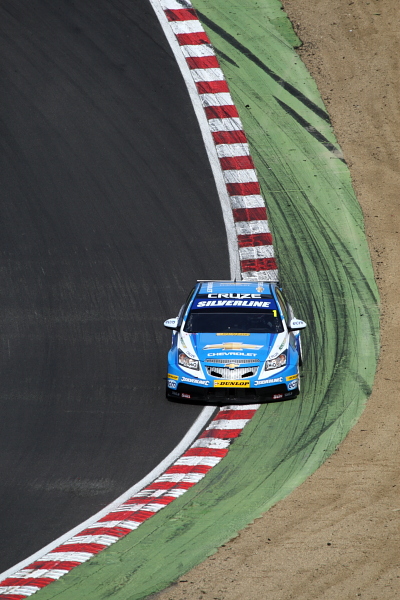 Jason Plato in the Chevrolet Cruze at Brands Hatch

After a break for lunch with a walk round the paddock, it was time for more racing and I chose to use the pitlane grandstand. Whilst you can see much of the circuit from here, it’s not great for photos since there’s a lot of high fences in the way for most views or you need an 800mm lens to get cars a reasonable size in the frame.

The touring cars have three races on race day so the chance to move to somewhere else was taken. The high safety fences become lower and easy to shoot over if you move all the way round to the outside of the track at the join of McLaren and Clearways. Here you almost get a straight on view of the cars travelling towards you, and here I also switched back to the 70-200mm lens with the extender. But soon found that the cars were often too small in the frame and with the lens at 280mm even the bigger Ginetta GT cars could fit the frame. So it was back to the 100-400mm again. The sun had moved round the circuit and was now lighting the side of the cars as they turned in front of me. I used the longer lens with some slower shutter speeds here to pan with the cars, working my way down to 1/80s shutter speed. Though at this speed the hit rate drops since the cars are bouncing up and down through the bend. The little red and white Renault Clio with N Hamilton on the window was driven by F1 star Lewis Hamilton’s younger brother.

The final race saw Matt Neal in the Honda Racing Civic take the win. However reigning champion Jason Plato had won the earlier two races in the day. Touring car racing is highly competitive and the cars seem to have different strengths and weaknesses in different parts of the circuit. The result is a great racing spectacle. 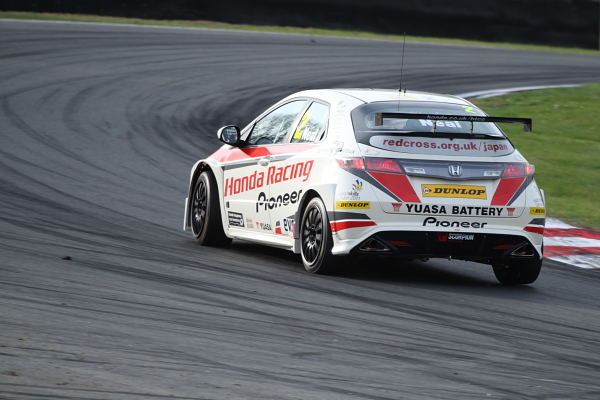 With the last race of the day over it was time to go and think of how to deal with the 1800 pictures I’d just taken. Now having reviewed the images from the day it is obvious that the majority were shot with the EF 100-400mm f/4.5-5.6L IS USM lens and I wasn’t the only photographer with that lens, it’s incredibly popular for this kind of racing photography. However if that’s your chosen lens it might be worth adding in an EF 24-105mm f/4L IS USM to give you more options in some places around the Brands Hatch circuit.