Two exposures in one frame

When photographers put a flash on their camera, it seems all too often that they switch off the ambient or available light part of their brains and forget that in the majority of pictures there is an element of the frame lit by ambient light and an element lit by the flash. It is this two exposures in one frame idea that I convey to photographers when explaining flash photography.

The important consideration is that both elements, the flash lit and the ambient lit have their own set of controls and metering. As a thinking photographer you can meter for the ambient in one part of the frame and consider the composition, then with the other tools on your camera you meter for the flash and finally choose how to balance the two elements or choose to give it over to the camera to make the choice for you.

In most DSLR cameras there is separate metering for the ambient and flash elements of the frame, and also [ambient] exposure compensation AND flash exposure compensation. This gives the photographer the ability to control the brightness of each of the two lit areas in the frame independently and also the balance between them. Make the ambient darker and a brighter flash lit area will draw attention more as your eyes tend to look for brighter areas of a frame first. Reverse this and the effect of the flash will look more natural or less ‘flashed’. 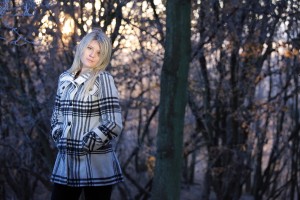 In the case of this image, the flash is zoomed in to concentrate it’s power on the models face and the ambient elements lit by the setting sun are exposed to give a slightly darker but realistic background. For this picture manual exposure was used for the ambient scene: ISO 400, 1/60s at f/5 but the flash was left on automatic E-TTL II and the white balance switched to 3600K as the flash also had a 1/2 CTO gel on it.